Mets: Quick Hits from the Media 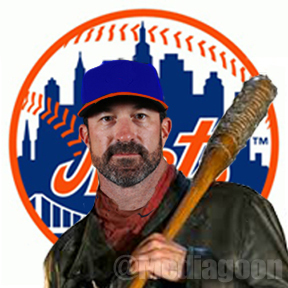 I am feeling lazy as hell today. I worked 17 hrs yesterday, woke up  a tad earlier then I should have today and I am totally wiped out. So you are getting some Lazy Goon writing today.

That is something that is going to be a tough decision,” Callaway said. “Dom Smith has come into camp looking real good, he’s in great shape. He did a great job this offseason of preparing.
“I had a talk with him and the expectation for Dom is to go out there and do everything he can to be on the major league team. Adrian Gonzalez is going to be one of the most prepared guys you have ever seen and has already expressed his willingness to mentor Dom Smith, so I expect we are going to have two first basemen who are going to have good camps, and that is going to be a tough decision in the end.”

Brandon Nimmo had a .379 on-base percentage last season and could be part of the solution, but Callaway and team brass are leaning toward using Juan Lagares as the primary option in center with Conforto sidelined. Lagares does not profile as a leadoff hitter.
Among the ideas that have been discussed is using Todd Frazier in the leadoff spot. Frazier had a .344 on-base percentage last season, but doesn’t have much speed.

This is wacky. I expect Nimmo to win the CF/Leadoff job until  Conforto gets back

Pressure pushing down on me, Pressing down on you no man ask for Under pressure that brings a building down Splits a family in two- Queen or Callaway?

BTW, I dare you to try and not read that like NEGAN from The Walking Dead.

Did we know Callaway and Eiland had a previous mentorship?

Eiland, 51, goes back with Callaway two decades, when the two former pitchers hit it off at opposite ends of their playing careers as teammates in the Tampa Bay organization in 1998.
“Dave took me under his wing, and instantly I saw the value in Dave Eiland and who he was as a person… It was evident right away that he was gonna hold me accountable for the things I did,” Callaway said. “So I’ve had a respect for Dave Eiland from Day One. I’ve got to see him coaching against him over the years…and I respect him probably more than anybody in the game.”

New Pitching coach is 51? Damn not that much older then me. I am getting old.

Jeurys Familia was caught off guard Tuesday morning by the news his agents, Seth and Sam Levinson, were being sued by a man who claimed they basically employed him to procure PEDs for their clients.

Familia said he knew of the man, Juan Carlos Nunez — who filed the bombshell complaint on Monday — but said he never received any type of PEDs or “help” from him.
“I just know of him because I have been with that company for almost 10 years now,” Familia said, “But no, I don’t get anything from him. I don’t know anyone who did. I don’t know anything about it. I can’t say anything.”
Familia is one of several ACES clients in the Mets clubhouse. The Brooklyn-based agency also represents Mets captain David Wright, outfielder Juan Lagares and catcher Kevin Plawecki, who said he had just heard about the case secondhand Tuesday morning in the clubhouse.
Plawecki said he has never met Nunez and didn’t want to comment on his agents or the suit.
Wright was not available for comment Tuesday


Read the rest hear at the NY DAILY NEWS

@metspolice fire away about my laziness today.... I am fully aware of my lack of trying to put real thoughts up. 32 hrs in two days of work has already gotten to me....
Posted by Media Goon at 7:49:00 AM