Piazza 9/11 Jersey: The Story From The Original Owner 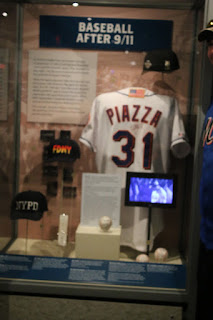 A Funny thing happened the other day. I met up with Livio Forte. Livio is mutual friends with a great buddy of mine. Livio is also the person who sold the Piazza 9/11 jersey that caused so much controversy last year. Before we get into the whole 9/11 Jersey thing. Let’s talk about Livio and his fandom. At age seven he got to see the Mets win the 1969 World Series.That cemented him as a fan. What kid in those formative years wouldn’t gravitate and lock into fandom of a team with that happening? I know when the Mets won in 1986 and I was ten years old that sealed the deal for me. In 1973 the Mets lost the series and Livio as an eleven year old was crushed. This guy has been a fan from the highs to the lows that the Mets have endured over 40 plus years as a fan. Right now even though the team is doing really well, we are at the point of one of the lows personally with the team. Livio reached out to me through our friend to tell his side of what happened.


I know, I know, I’m getting off topic. Back to Livio. During the last years of Shea, the Mets locker room flooded due to back ups in the pipes. Livio’s business is to clear/pump out grease traps, pipes, etc. The plumbers  at Shea called Livio in an emergency to help get the pipes cleared out. He and his men were there from 8am to midnight that night clearing out all the sludge that had accumulated over the years. This job that would cost someone roughly 12-15 thousand dollars was significantly reduced by Livio to a third of that for the love of his team. He didn’t do it because he wanted anything in return, he did it because he was a fan and felt like he was helping out “his” team in a small way. The Mets and the plumbers loved his work and asked him to be their vendor for this service. Over the years Livio said he would supply the Mets  equipment for free to help clean out the grease traps and would replace that equipment every year for free( for seven years for approximately one hundred and twenty-five thousand dollars for that time). This service they were getting would cost another business tens of thousands of dollars. All that time, Livio said to me that was buying game used memorabilia, going to fantasy camp with two to four more guys he would bring with him and had season tickets.


Livio also told me that he never asked the Mets for anything and became friendly with a lot of the folks in the Mets organization. Livio was spending a good deal of money on a team he loved. Between spending thousands on memorabilia every year, giving them free services, and also attending fantasy camps with friends( that he brought down). When the Mets opened the Mets museum at Citi Field in 2010 they asked Livio if he could lend some things to the museum. Livio was happy to oblige. That year about fifty percent of the items in the museum were Livio's. There was a joke made by a Mets exec in front of Livio that "we should just sell the stuff to Livio so we can get it lent back to us".

When the whole Charlie Samuels thing happened and the Mets were able to get there property back, they sent a list of what was recovered and that they were going to resell. Livio had one of the first cracks at seeing the list. Livio and our mutual friend saw the list(over 8000 items) and couldn't believe that they were selling the 9/11 things. They photo matched the Piazza Jersey and helmet from the 9/11 game. Livio asked for 100 items from that list. He ended up buying about 75 of the items. Livio ended up paying 20 thousand dollars for both the jersey and the helmet. The Mets created a Letter of Authenticity and photo matched the jersey and helmet for Livio. Remember that part. The Mets Authenticated it for him. Livio also bought twenty other jerseys from the 9/11 game.

Livio is about to have two kids about to be in college and wanted to make it easier on them not having to have large debt with college loans. He didn't want to do it, but he decided to sell the Piazza 9/11 jersey and some other items to help with the college expenses. According to Livio, before he went to put the jersey up for auction, he asked the Mets if it was okay and they said yes. When the main stream media got a hold of the story that the Piazza jersey was up at auction and there was a backlash from fans the Mets started to try to save face. They offered Livio fifty grand for the jersey. Not only was the jersey at one hundred and twenty thousand dollars at the auction the fifty grand they offered him wasn't even cash. Nope. It was in merchandise credit. Livio of course turned it down which led the Mets to back peddle and send a cease and desist letter to the auction house. The letter was for them to stop calling it the authentic jersey from the 9/11 game because there was no proof of it. Now, if you remember earlier in this post, the Mets gave him a Letter of Authenticity from them saying that was the jersey. So, if they are saying that they can't prove that it was real, how did they give Livio the LOA? The auction house and Livio continued with the sale as is. They got an offer for 365,000 dollars for the jersey and they accepted it on a few conditions.


Mike Piazza's post-9/11 home run jersey will have a permanent home in New York.   A trio of Mets fans, including Anthony Scaramucci founder and managing partner of SkyBridge Capital, Tony Lauto a retired Wall Street executive and an anonymous third party signed an agreement today to purchase the jersey in a private sale from Goldin Auctions for a record price of $365,000.Additionally, as a stipulation of the private sale set forth by Goldin Auctions, the buyers have agreed to display the jersey in a rotating display at the National Baseball Hall of Fame in Cooperstown; the 9/11 Memorial Museum in Lower Manhattan, and at Citi Field.


Notice, part of it was still to be displayed at the Mets Museum even though the Mets sent a Cease and Desist letter that the jersey wasn't real. Livio, still was a fan of the Mets and wanted to do the right thing for other fans to be able to see a piece of history. 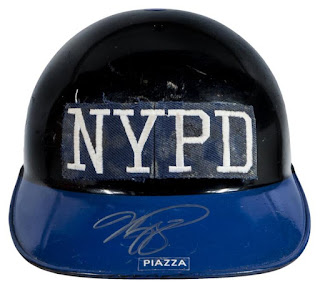 The Mets and Livio had another disagreement in 2016 and that led to Livio putting up the 9/11 Piazza helmet up for sale at auction. The helmet had gotten up to one hundred and twenty-five thousand dollars and then he decided to pull it from there. Livio decided to donate it the 9/11 museum. When the Mets found out about the helmet they asked him what he was doing with the twenty other jerseys from the 9/11 game that he had. He asked them if they wanted to buy them back or trade for other memorabilia and they refused to buy them back. Remember that Jeff Wilpon stated in the Daily News after the 9/11 Jersey came out that he would never let this happen again and that they have changed their policies on how the Mets will sell Game Used items. Why wouldn’t the Mets try to get these twenty jersey back before it would start another fiasco?


Livio decided he was going to donate the twenty other jerseys he has from 9/11 to Darryl Strawberry's charity to help raise money for his cause (Autism). Livio also is donating some other items to Jesse Orosco's fundraiser for Naval Special Warfare Family Foundation.

Livio has been parting with a lot of his collection due to the bad tasted that has been left in his mouth from this whole ordeal.  I can see where some people will be saying "Aww poor him" in a sarcastic way and not have sympathy for what went on. Ask yourselves, what would you do if you could buy a piece of history and then down the road if you needed to sell it to help ease bills would you do it? I buy a lot of my memorabilia because I love having the pieces of history and then knowing I might be able to make money down the road also.


If anyone from the Mets Organization want to give me the Mets side of the story please reach out to me here at mediagoon@gmail.com.