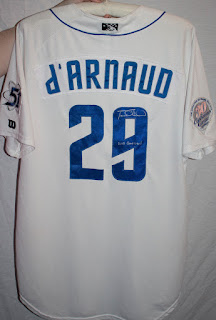 This jersey was worn by Travis d'Arnaud during his time with the Las Vegas 51's in 2013. It was worn right before his call up to the major leagues, joining the Mets. It has been signed and inscribed "2013 Game Used".
Above you can see an image from the signing. Included is an LOA from the Las Vegas 51's.