From @metspolice: How to get Wright to play. 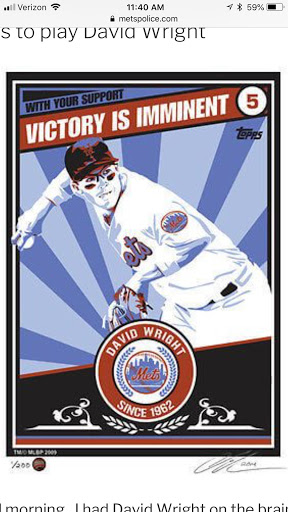 First of all here are my thoughts on this. Is David Major League ready? If he is he should be at least on the bench with Reyes being released. If he isn’t major league ready and he is not medically cleared to play by Mets doctors then the Mets and Wright should get another opinion from a doctor not affiliated with either of them for an unbiased opinion.
From Metspolice.com


DAAAAY…..VID. DAAAAY-VID. Remember the old Darryl chant? Originally that was opposing fans somehow taunting Mr. Strawberry. Let’s use that cadence and chant David while the Mets are on defense. If we do it while the Mets are up then the Mets will drown us out with their noise garbage. Let’s make the soundtrack of the game fans just chanting DaaaayVid so you cannot miss it.

WEAR WRIGHT STUFF TO GAMES. Somewhere over the last 15 years you have acquired a Wright jersey, tee etc, wear it to every game you attend the rest of the way.

Read the whole article here
Chants will work, maybe We want Wright! Would work. Shannon goes into talking about a walkout to embarrass the Wilpons, I doubt that would work. But brings signs, Wright big heads, and wear Wright gear and you can make a big enough sound that it should catch some media attention.
Posted by Media Goon at 11:48:00 AM