Hey Guys. The fine folks over at Katch Astoria asked me if I minded putting up some of my memorabilia in their bar/restaurant. I said sure why not. Right now we are starting of small. There are a couple of jerseys over there right now. I decided that instead of doing the run of the mill every day jerseys that you usually will see up at a sports bar. What is up there right now is the Jurassic World Binghamton Rumble Ponies Game Used Jersey worn by #31 Corey Taylor.... 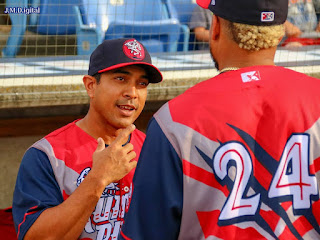 There is another cool jersey that is hanging up there. It's a hard to find one too. From 2009 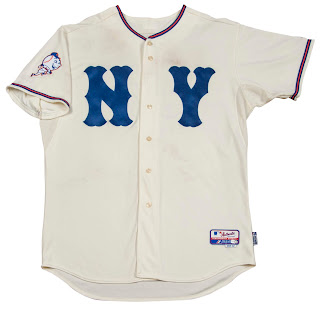 The New York Mets will honor their National League heritage by wearing throwback uniforms inspired by the turn of the century New York Giants uniforms when they play the San Francisco Giants this weekend at Citi Field.
The cream-colored jerseys feature an oversized blue "NY" on the front, blue and orange piping on the sleeves and a Mr. Met patch on the right sleeve.

This was the game that David Wright got plunked int he head from a pitch. Randy Niemann was the the bull pen coach back then and this jersey was his.

I have decided to do the "coffee house thing" and while my jerseys are on the walls of Katch you can admire them or you can also buy them. There is a little blurb in each case that tells you about the jersey and who to contact if you are interested in buying them. Hope you guys enjoy peeking into my collection and who knows, one of them might Katch your eye!