David Wright, The @Mets, The Doctors, and Baseball. 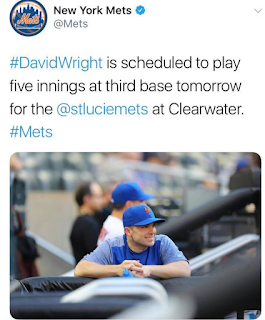 For years I have been hearing from folks close to David that his spinal stenosis is leaving him in really rough shape. If doctors saying he can play, let him play. Mets you guys get killed everyday by your own fans. Your team doctors said Wright isn't ready to play. One of your acting three headed monster GMs doesn't thing he can play. I have an idea why not get n independent Doc to check Wright out. If he is fine, let him play. If he isn't good right now playing, he can't be worse then Reyes is doing. And you know what? If he sucks and doesn't look like he has it anymore then you can at least say to the fans you tried and then maybe Wright will see he can't play anymore and maybe retire? That might help the fans see that you care about your players and your fans.