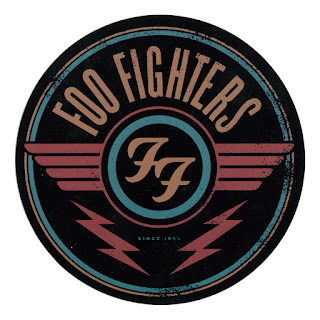 I'm taking a break from the Mets with this post. The Foo Fighters are easily my favorite band and while I was watching them last night at Jones Beach.

I was reminiscing last night with my wife Tricia about when I got my first Foo Fighters album and the shows I have seen them at. I remember I bought the debut Foo Fighters album on cassette at Sam Goody's along with Bush's Sixteen Stone. I wasn't expecting anything like what I had heard from Dave Grohl on that album. I was expecting maybe more grunge type stuff like the Seattle sound that Dave came from with Nirvana.(Btw listen to Nirvana pre Dave Grohl and you can see what he did to make the band better then what it was. I still contend if Dave Grohl wasn't a part of Nirvana it might not have been as big as they became). I grab the cassette and put it into the radio aka Benzi box of my first car( a 1984, mustard yellow, four door, Subaru GL sedan) and was floored by it. This. This sounds like... This sounds like ROCK. It was awesome. I got floored by "This is a Call". It just sounded... I still can't even describe it. It was loud, it wasn't angsty but almost an anthem dare I say. Of course it was an anthem. Look at the title. Stop being dumb Keith. I remembered playing this album non stopped for weeks on end. Then I found out from K Rock that Dave Grohl did everything on this album. There was only one Foo Fighter and it was him. I am thinking about the cold nights driving around with my friends while we attended St John's University and going to different shows. It was a soundtrack for me that year. That along with NIN, Marilyn Manson, Metallica, Pearl Jam, Megadeath etc...

The Colour and the Shape. Another solid album. It gave as Monkeywrench, My Hero, and Everlong. The music videos on MTV( Yes kids. MTV played music videos all the time.) were ground breaking in visual styles to me. I just couldn't wait to get to  see them.After Colour and the Shape came out I got to see them the first time at K ROCK's first Dysfunctional Family Picnic. I just couldn't believe how good they were live. Dave Grohl as a front man was unbelievable. He just seemed like he was meant to always be a leader of a band from there on to me.

The next album was Nothing Left to Lose. It brought us Learn to Fly and Stacked Actors. I have to admit I liked this album but never loved it. Didn't see them on tour but might have caught them at same point for an MTV Awards show or something.

I saw them again at some point at the Hammerstein Ballroom where My Morning Jacket opened for them and it was another awesome show. You can see that the band just has fun playing together and This was the tour where I started thinking who are the Rock stars of my era that have lasted and are Rock Stars. Dave Grohl is right at the top of it with Eddie Vedder and Bono.

BTW, remember when they played Citi Field in 2015 and Dave had broken his leg earlier in the tour? That MF'er still played on a guitar throne. He had a broken leg and still gave it his all. I don't know too many performers who would do that. I also don't go to a lot of concerts anymore but I will always try to get out to see this band.

Okay. I took a long and windy road to het back to the show I saw last night. the stage looked to be stripped down becauseThe Jones Beach Theater isn't huge and they don't usually go over five trailers there for staging and equipment. The Foo Fighters came out strong out of nowhere and just started playing.  The crowd got hyped right away and went insane. There was something I haven't seen in a while and it reminded me of Tommy Lee and Motley Crue. Taylor Hawkins's drum kit was on a platform on hydraulic lifts and got raised into the air while he played! ROCK STARS! They also had Taylor sing Under Pressure with the lead singer of the Struts(the opening band) while Dave Grohl played drums. Oh John Travolta stopped by and Dave sang a few lines from the One that I want from Grease and Chad Smith from The Red Hot Chili Peppers played drums while Taylor sang again. Taylor has a killer voice btw...

It was a fun show to see as always. I feel like Dave Grohl is one of our real last rock stars of my generation and the Foo Fighters might be one of the last real Rock Bands also.

Back to my reminiscing. I realized last night that I graduated college 20 yrs ago coming up this September. God Damn I am getting old. I have seen them while I was in college( in my early 20s), working in TV production(In my mid  20s), working in a another part of the Film Business (early 30s), while working on Royal Pains and still only having a girlfriend(now wife) (in my late 30s), and now with my wife (early 40s).  Damn it I got old but the Foo Fighters didn't seem to age at all.