This is the tweet that started it all tonight. Got the text from my sister. I get 9/11 is today, but the security issues have been going on for a while. The backpack ban was supposed to move the lines and  be better for the fans. This all sounds like crap to me.


Select security is over zealous? I don’t blame anyone if this becomes one of their reasons for not renewing plans and going to games. pic.twitter.com/C6162tqMHo
— keith blacknick (@Mediagoon) September 10, 2019


Do the Mets have any credible threats being reported to them? Are fans in danger?
Should they be telling us?

I think we should find out what has the @mets security team in over-zealous mode. Or properly zealous mode. @mediagoon. If they are aware of something they should let fans know.
— metspolice.com (@metspolice) September 11, 2019


Mets. What is is the policy here? Who is training these guys? 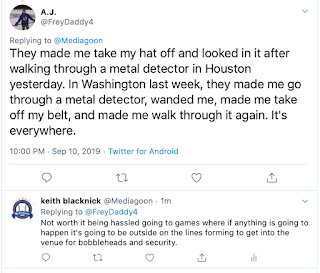 I’ve been at games where they’ve opened the zipper on my wallet. Tonight? Just grabbed my purse to feel if anything sharp was in there - never opened it.
— Chelsea Stern (@TheChelseaStern) September 10, 2019


I open up bag my bag hold it open let them see it was my jersey and camera. Did not check front pockets and said enjoy

Month later guy grabbed it from hands then accosted me for 15 seconds not to hold it open, I’m now suspicious. Made me turn on camera, needed lens confirmation
— Joel Lobel (@JWLobel) September 10, 2019

Husband & I went last night. I have a small handbag that I’ve brought to the park before. They went in Every. Single. Zippered. Pocket. Along w/ my wallet with my credit cards & cash. Hubby’s retired LE & said it was because of 9/11 but it was way too much for an off night.
— Chalulu (The Tragic Is Back) (@chalulu23) September 11, 2019

Security have been acting jerky before this week I get what Chalula is saying though. If this was the only few days stuff like this happened, I get it.

I got a better one. Today the security guard made me take out my headphones case and then proceeded to tell me to open it and then she asked me what it was, so then I had to pull out the earbuds out of the case to explain to her it was headphones. Unreal . I attached the photo pic.twitter.com/bGNo6f7kEZ
— Carlos J Ramirez (@Los53) September 11, 2019


Security guard doesn't know what airbuds are? Come on. Training.

One more tweet then I am going to emails.

There you go @Mets you made another diehard fan not want to come to @CitiField anymore. BTW she’s a plan holder. https://t.co/8fDg2veNme
— keith blacknick (@Mediagoon) September 11, 2019


Here's one email from a plan holder that renewed his tickets


This past Sunday my wife was at the bag check. The security woman was poking around in her bag and she lifted my wife's wallet out. She asked what is this? She started to try to open it and examine it. My wife said it is a wallet what do you think it is? The security lady then opened my wife's glasses case. She has very expensive glasses. I was waiting near the ticket taker when she was at the check bag table. She looked upset when she got to me. I asked her what is wrong? She told me the story and she thought the security lady was rude and unfriendly. I said lets find a supervisor or go inside to Mets customer service. She said no just forget it. I could tell it bothered her.

This was Sunday. I have been to other venues. MSG, Jones Beach, Barclays Center, and you know what? Almost every time I had an interaction with Security going in was pleasant. If i pinged because of my belt there was a joke showed them the belt and then they were satisfied made another joke about it and went on my way. Not with the Mets security these days. A lot of them have just been acting jerky. And if you guys think this was just because of this week, here are some posts from last month.

You guys might think I am crazy but if enough of this is going on to other folks there is something that needs to be fixed at the ballpark. I am not condemning the security aspect of a crowd going to venues where there is a possibility of stuff happening. I am condemning the way it is being implemented.

This happened outside of an arena. When? When a ton of folks we're leaving.

Here's what some venues are doing also.
Posted by Media Goon at 2:18:00 AM