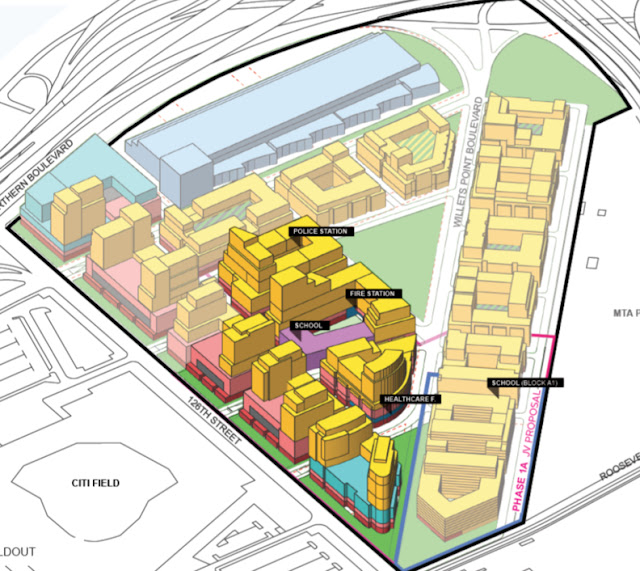 In case anyone is wondering what is going on with the property over on 126th street  Tom Seaver way you should read this. It talks about the 45 businesses the City used Imminent Domain on and help relocate to a warehouse in the Bronx. For the money they spent couldn't they have found these guys a similar warehouse in Queens that wasn't so far away. They might have even been able to use the old daiy facilities over in Jamaica.

Rodrigo Sinchi was lured to move his auto shop out of Willets Point by city-subsidized economic incentives in 2015. Then he was evicted(MG HERE- READ THIS) from the city-guaranteed new location in the Bronx in 2017.
After he conceded about $20,000 of lost income, gave up on managing his own shop, and went back to the Iron Triangle to find a gig just to get by, the city barred traffic from his new place of work by gating off Willets Point Boulevard as phase one of its adjacent megadevelopment.
After over five years of struggle, Sinchi is trying to reconvene the Sunshine Cooperative, a group of 45 mechanics and auto-body shops in Willets Point, who negotiated with the city for subsidies in 2014 after it took over their properties in order to develop Willets Point.

This just seemed like it was destined to fail from the beginning. While across from Citi Field needs to be developed it could be seem like the city set these business owners up to fail after they moved.

I noticed the gates in July around the roads and was trying to figure out what that was about. I am shocked any businesses are still even there every time I drive to a game and see the guys on the off ramp trying to get you to there shops.

Don't forget between the Queens Development park aka Sterling Equities aka the Wilpon's not being able to build a second mall  on parkland and then wanting to use the Iron Triangle for a Delta Parking lot while the AIR TRAIN is being built , who knows when this property will be developed.