Not renewing my half season Mets ticket plan update. 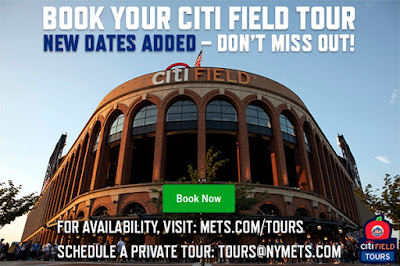 I had a talk with some folks in the Mets Organization yesterday about the experiences  that myself and others have had at Citi Field recently with going to games. I also through about all the different ticket promotion/discount problems too. You can read about those experiences here, here, and here.

The Mets person I was talking to, told me that they were very disappointed in what has been going on with the way the staff I have complained about and acted towards myself and other fans. Even though the season is in the last few months(barring a playoff run) they are going to address it with the staff. I know the people who I was talking with will do what they say and deal with the problems with the staffing. The ticketing is something that needs to be looked at and would take a longer time to figure out.

That being said, I got this text message from my buddy Dave who has Dave's Mets Dugout over on facebook.

So Me and Bradley are walking in via no bag line at main entrance. Get through security guard was a real prick. After we scanned tickets I saw a Supervisor there and mentioned to him how it’s wrong to get greeted by a Jerk like that when entering the park. Guy was like he’s not under my control but I am with you. He insisted on buying us a beer in delta club. I’m like that’s ok. He well I want to do something for you guys. I said it’s all good it’s just wrong how they treat fans and desire ticket holders.

We ended up taking him up on his offer because he insisted. It’s just no way to test fans. I do not get why rose guys have to be jerks to us and not be friendly?

This the problem. The security staff has been very jerky lately and on the day I talk to the peeps at the Mets this example pops up last night. Rome wasn't built in a day and I know this is going to take a few games to get fixed as Security you are some of the first faces fans see. You can do your job without being jerks.