Will the Mets issue an apology for the line's to get into last nights game?

I don’t see an apology from the @Mets for the horrible scenario at tonight’s game. I guess they don’t care about their loyal fans #LFGM
— Roger Clark (@RogerClark41) September 14, 2019

The scenario that I have foreseen and was bitching about for a while now has been
the jerkiness of the MetsSecurity Staff. I have posted about it over and over and over
again. From them wearing their stupid wannabe tactical vests to the attitudes of the staff
itself, it has not been good. The Mets banned backpacks in the middle of the year in the
guise that it was for the fans convenience, safety, and to make the lines move faster. Security is now
rifling through every pocket in bags, in every pocketbook/wristlet. You have keys? They are going to
look at those too. They are going to pull your things that you have folded nicely out of your bags and
then make you rush to jam it back in. They have checked through tampons, birth control pills, and even
supposedly tried to pat down a toddler.A TODDLER!! Mets what the hell is going on. You have already
alienated me. I am not renewing my 1/2 season plan.You are on the verge of alienating my good, good
friend MJ who was the Mets fan of the year a few years ago. Now you have even made diehard  fan NY1
reporter Roger Clark say that he is never coming back to a game. What the F is going on with you guys?
Is this how you are going to treat fans from now on? Your security staff is making the TSA look like
Disney cast members. Is there going to be an apology to the fans that got there in plenty of time to get
inside the gates and watch the game by 7:10 pitch? It really might be time for you guys to reevaluate
your procedures before you have zero fans coming to the ballpark.

#Mets fans having a hard time getting in tonight. 7:35 and look at this line to get into Citi Field! pic.twitter.com/EiOn9t2eJJ
— Yankees Fireside Chat (@yankees_chat) August 29, 2019

Oh and Btw look what Great American Ball Park is doing for folks with backpacks. 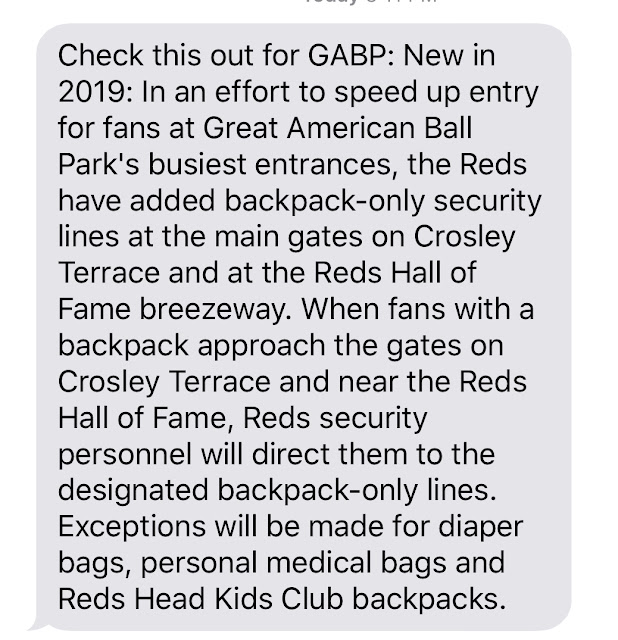