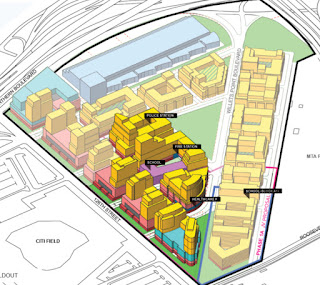 When exploding tire shrapnel struck a young mechanic in the chest and knocked him unconscious in a Willets Point auto shop recently, emergency responders were stalled by the same gates that block several major streets to the industrial enclave, according to a QNS investigation.
The city erected the gates early in July as part of its ambitious plan to transform the neglected industrial area in Willets Point into three affordable housing buildings, a public park and an elementary school, among other developments to be determined by a city task force.
But in executing the first phase of the city’s plan, the Department of Housing Preservation and Development (HPD) made street closures that are financially hurting the shop owners who remain in the Iron Triangle and cutting them off from emergency response services.

How do you install something like this without thinking ahead for the folks that still work there? The Iron Triangle has always been a maze. Is there no way they can set up a quick in and out emergency route? I also am still trying to figure out how there are any shops still there. I thought they were "ALL" supposed to be out of there a few years ago. The ones that did stay behind did seem like they were smart and stayed behind and didn't lose a ton of money in the move like everyone that moved to the Bronx.
Posted by Media Goon at 7:00:00 AM