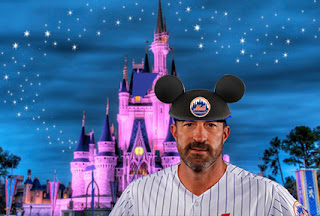 
Now the Mets are following up the Gonzalez mistake with another mistake. That’s what they do best and as a result we have Bautista, 37, getting valuable at-bats like in the 6-3 loss to the Diamondbacks on Thursday when with the game still close and Bautista struck out after being ahead in the count 3-0.
Bautista, like Gonzalez, was once a major league force. Those days are long gone. The Mets are allowing him to hang on even though the Blue Jays and the Braves gave up on him.
Let it go, Mets. Let veterans well past their prime go. The Mets are always looking for the cheap way out and can’t develop solutions to their problems.
This is a terrible indictment on the Mets organization that they have no outfielders they can pull up from the minors. Give the at-bats to Tim Tebow to satisfy Tebow Mania or make a deal for an outfielder.
Bautista is trying to cover for missing left fielder Yoenis Cespedes, who may never stay healthy again and still is not doing baseball activities in Port St. Lucie. What a mess.
The Mets’ greatest strength is now their greatest weakness.

Read more here at the NY POST  MG- Oh God, I am agreeing with a beat writer. The Mets should be looking to add players that can do stuff for the team. You bring in someone like a Bautista when the team just needs a small missing piece.

The Mets are so much worse than bad

Life is so bad for the Mets, they have become an unwatchable team. No excitement. No sustained hitting.
And then there is the imploding bullpen.
No chance.
These Mets were built for the home run and the walk. Opposing pitchers have figured that out and how to pitch to the Mets, busting their hitters with fastballs up and sometimes away. It has become the same story.

MG- I am in Phoenix right now and went to the game last night. It was so boring that it took us out of the game early watching it. I really couldn't believe how shitty it was. Thank God, I have done some sight seeing out here or it would have been a total waste.

Secondly, there is longstanding animosity between Jeff Wilpon and Yankees president Randy Levine, which goes back to disagreements over new stadium financing and the Mets blocking the Yankees from bringing their Triple-A team from Scranton, P.a. to Newark.
And finally, the two sides have rarely made any trades — let alone for superstar players that are in their prime. They couldn’t even come to terms on trades for complementary pieces Neil Walker, Lucas Duda or Jay Bruce last season, which reportedly resulted in a pissing match between Wilpon and Levine.

read more over at the NY Daily News

MG- Mets Yanks won't make a trade that would make Mets fans show up at Citi Field with pitchforks and take the place down brick by brick? No really?