Bullet Club's ALL IN 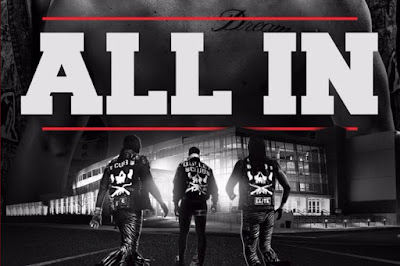 YEAH I KNOW IT WAS THE YOUNG BUCKS AND CODY THAT PUT IT TOGETHER BUT THAT WOULD HAVE BEEN A LONG ASS TITLE.

I am going to be pretty vague on purpose in case anyone reading this didn't watch it yet and want to.

The WGN Free part of the show. I didn't catch it but here is the rundown of who was in it.
Flip Gordon won it and later in the night wrestled Jay Lethal (ROH Heavyweight Champ).


Didn't see this so I don't want to comment on it.

Now on to the PPV part of the show. I might not remember it in the order the card happened..

This was a solid women's match. Chelsea Green has really improved in the ring and has a pretty cool gimmick being the hot mess. Britt Baker, I have never seen before but she impressed me too. Madison Rayne was solid as always and was as good as she has been in Impact. Tessa Blanchard. She is good, the Magnum finisher is pretty solid and it was nice to see Tully Blanchard and Magnum TA come down the aisle with here.

You know for a guy who is an actor Amell really puts his all into the matches he has had. Daniels as always is solid and all I kept thinking about was how did Warner Brothers sign off on letting Amell wrestle the way he did.

I have never seen Janela wrestle before. I can't get a read if I like his style or not. Hangman Page was pretty solid and his facial expressions were wild. There was Res Erection of sorts and a cameo by a formerly murdered wrestler and lets not forget his version of the druids.

Scurll has become one of my favorite wrestlers and this was one of the more solid matches of the night. Okada is a such a strong worker and Scurll has star quality written all over him. I love the villain gimmick and the above solid match that they have put together.

Jay Lethal came to the ring with the Genius Lanny Poffo and was oozing Black Machismo. That's right Lethal snapped into a Slim Jim and became his alter ego. Brandy Rhodes came out with Flip Gordon and there was a great spot where Lethal was acting like Brandy was Miss Elizabeth.

Great match. Love what they did with it. I know Cody was supposed to be the heel for the match but the crowd was behind him pretty big time and Brandy Rhodes came through big time for Cody.

Another great match. Each guy had to do their signature moves numerous times to wear the other down. There may or might not be a Chris Jericho sighting....

This match is just what you think it would be with all the folks involved.

The round up is that it was that it was one of the best wrestling shows that I have seen in a long, long time. The production value was great. Loved the announcers. The camera work was solid. It showed that two or three promotions can put on a solid show together. Maybe there will be an ALL IN 2?

If you really want and in depth break down go to  Bleacher Report here.