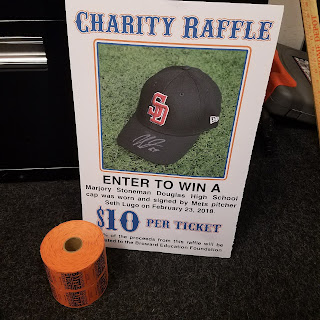 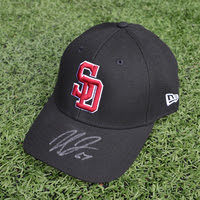 I bought a few of the MSDS hats off auction from the Mets.
These hats were worn Opening Day by the Mets in honor of the Students from Marjory Stoneman Douglas that were involved in that heinous school shooting a few weeks ago. I spent a decent amount of money on them because the proceeds went to charity benefiting those affected by this tragedy. I want to do more.

If I was to do a raffle opening day for a Majory Stoneman Douglas Eagles game Used Seth Lugo and signed hat, with the money raised being donated to the MSDS charity, would you guys enter for it? $10 an entry? Would you guys be in for it? I'll be in the MTA lot hanging with the T7LA so if you want to help raise some money and maybe win this cap, come stop buy. My idea is that you guys bring  $10 bill and you write your name and number on it then drop $10 per ticket to get put into raffle bucket. Sometime during the tailgate, when we feel like we raised a good amount of money, we will pull a a random ticket out and see who our lucky winner is. The proceeds will all be donated to charity for the victims and their families of this tragedy.