I attended the New Balance “In The Game Event"- @meeshfrack 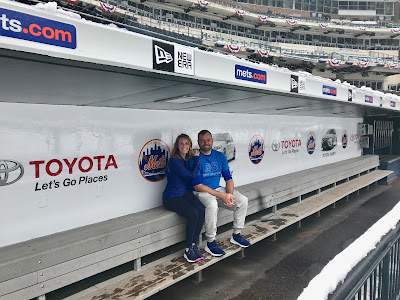 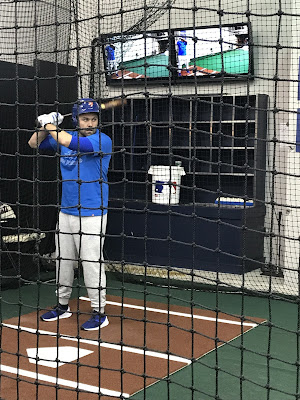 Every offseason major league teams renew or sign new sponsorships, and with new
sponsorships come new opportunities for events and fan experiences. This past offseason New Balance signed a seven year contract with the New York Mets. Today they hosted an
event called, “In The Game.”

The event was intended to be Home Run Derby style, allowing all participants a chance to
swing for the fences at Citi, in full uniform, receiving tips from some of our favorite players.
Unfortunately, due to the few inches of snow this morning, an alternative plan was put into
motion. My husband and I were lucky to be a part of today’s events after winning the “Share
Contest” during last week’s episode of The7Line podcast, Orange and Blue Thing, hosted
by Darren Meenan and Brian Erni.

Initially we were supposed to field the fly balls in the outfield during the duration of the derby. Even though the event slightly changed, we were equally as included in today’s activities
from start to finish, receiving our prize packs as well.

We were told to arrive today around 10:30, and to enter through the Seaver gate. We were
led up to the Delta Club, 1st base side, and given our duffle bag of prizes; and they didn’t
skimp on the goods! Dan received:  gray sweatpants, new sneakers, a gray quick dry
workout shirt with blue sleeves, and a light blue New Balance (NB) t-shirt.
I received: navy blue workout leggings with a white NB logo on the back of my leg, new
sneakers, a ¾ zip-up blue running shirt, and an off-white zip-up hooded jacket. (For the
record. I have a tough time finding clothing that fits well, and each of these items fit like a
glove. I was skeptical - or nervous - at first, but really impressed once I put them on!)
Honestly, the NB duffle bag was enough of a prize, with all its pockets, hidden compartments, laundry bag, and ability to be carried 4 ways (1. by hand, 2. on our shoulder, 3.
cross-body, or 4. as a back-pack) it makes the perfect weekend bag!

Once we got changed into our new gear we watched them set up the cages for batting
practice for a bit; we were led down to where the fun was happening as it began. After some
photo opts in the dugout both teams were lead into the cages. The sprintig area housed a
live DJ (with some pretty cool Mets decorated turn-tables,) and an MC. The white team went first, followed by the gray team. Each participant had an at bat song, and were given
roughly three minutes in the cage; 1 for a warm up, 2 to hit. Amed Rosario and AJ Ramos
both came to hang out and give the teams some batting tips, which was equally as adorable as it was awesome for the players.

For the earlier part of the derby we stood outside the cages and watched the action through glass windows, until of course Dan was given a chance to bat, and I snuck in to see him in
action. I can’t pass up a photo and video opportunity!

While we were waiting we were led to the dugout to take some photos ourselves. We didn’t go on the field until later on when we were introduced to AJ Ramos and led back outside for a photo opportunity with him. In case you were wondering, he’s a very sweet guy and
genuinely excited to be playing in New York.

After Dan had some swings in the cage and another round of team photos happened outside, the championship round was played. The players from the white and gray teams with the most hits entered the cages once again and competed head to head. Long Island Lizard,
Paul Rabil, won the derby. AJ and Amed headed into the locker room, and we were taken
back up to the Delta for some drinks and appetizers with all of the participants and the NB
staff. The waiters and waitresses passed around pork buns, lobster rolls, and lamb chops.
There were some salads on one side of the bar, and we were offered a nice mix of beer,
wine, or soda.

All in all, it was a great day. Being able to meet a couple of the players, getting to go on the
field, hang out in the dugout, being given awesome and really comfortable NB gear, and be
in the batting cages was an opportunity many won’t ever have in their lives, and we’re truly
lucky to have won. 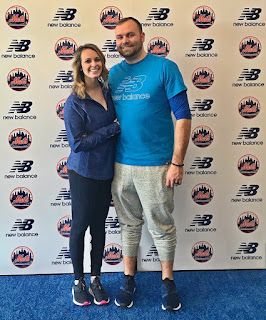 MG here- I am trying to get Meesh to write for this site. Let me know what you guys think. I want to add other voices to the blog and I think Meesh can be one of those voices. Hit me up at mediagoon@gmail.com.