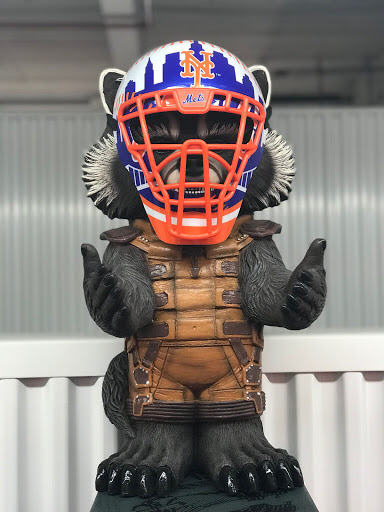 
ATLANTA — Mickey Callaway understands the pull of the golf course. After Mets slugger Yoenis Cespedes said he was reconsidering his decision to give up golf during the season, the Mets manager said he was fine with his players golfing in season with some stipulations.
“I think golf is like anything else. If he does it the right way,” Callaway said. “If he’s smart about it: (on) off days, days we come in and we’re not taking (batting practice) and it doesn’t fatigue him or affect baseball, then guys can do what they want away from the field as long as it doesn’t affect what we are doing with the team.”

Read more here.
MG- Golf is fine when you are smart about it. For example, not playing it hours before a World Series game.
Matt Harvey Pissed at Being Sent to Pe
From the NY Daily News


On a scale of 1 to 10, I obviously am at a 10 with being pissed off,” Harvey said. “My performance hasn’t been there and I have to do whatever I have to do to get back in the starting rotation. Right now it’s go to the bullpen, work on some things to get where I need to be and get my (stuff) in order and figure it out.”


Read more here
MG- Matt. You aren’t the pitcher you were a few years ago. Are you really pissed off or are you going through the motions? I don’t know, maybe time in the pen will help you figure out what’s going on. If you really want to complain, maybe you can go start in Binghamton for a bit. 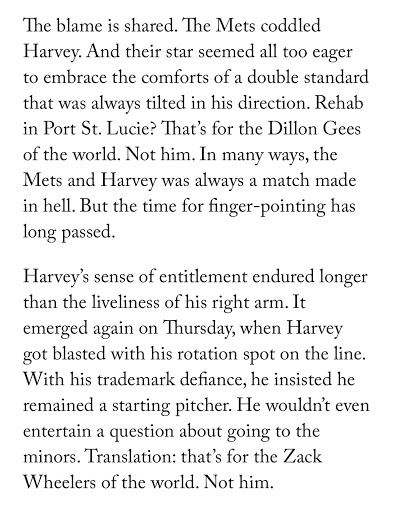 If you have the Athletic app you can check the rest of the story out there.
Carig nailed this big time. The Mets were so starved to have a big time player back when Harvey came up to the majors, they pretty much let him get away with anything he wanted.