Jim Duquette weighs in on ARod

Good. I’m glad I’m not the only one that remembers what was going on with the Mets and ARod back in the day. I remember in the newspapers and on tv about how ARod wanted that Merch tent and his own office and his own locker room too. I still can’t believe ARod said he wish he had more of a say in his free agency. That might be one of the most ridiculous lines I have heard in a while. 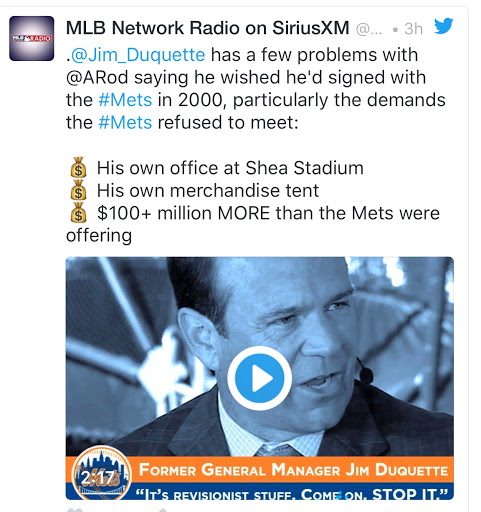 From The NY Post
To Mets fans, it was a painful reminder of what might have been. But to Jim Duquette, Alex Rodriguez saying on ESPN’s “Sunday Night Baseball” that he regretted not coming to the Mets in the 2000-01 offseason is pure fiction.
“It’s just revisionist stuff. Come on. Stop it,” the team’s former general manager said Monday on MLB Network Radio on Sirius XM.
I debate whether he and [Mike] Piazza would have gotten along anyway,” said Duquette, the assistant general manager at the time. “That year we went to the World Series. He came and sat behind the plate, did the whole song-and-dance type of circus thing that happens with him. It happened that particular year.
Read more here.
Posted by Media Goon at 3:59:00 PM