What the hell is wrong with some of you Mets Fans? 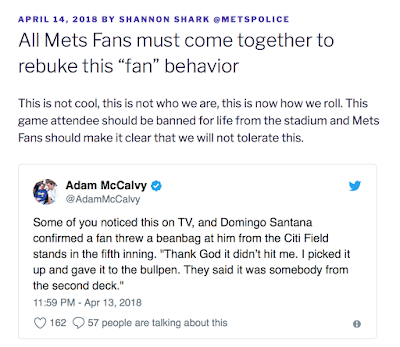 I am taking this from directly metspolice.com (they are having their 10th year anniversary this weekend btw). I caught the tail end of this last night when I came back from doing something in the other room to see Santana toss give the bean bag to the bullpen. I had no idea what was going on. I am going address this to the fan who did this and anyone who might have thought to do something like this.

WHY? WTF would you want to injure somebody? Why do you think it is fun or funny to throw something at a person playing on the field? Because he's on the other team? Because he is someone you don't like? Is it really worth injuring someone playing a game that is entertaining us? We aren't sitting at the Roman Coliseum watching folks fight other gladiators or lions  to the death. You folks that do stupid things like this forget that we are fans of a game. Your life will not change if the Mets win or lose. "But the Mets(or other team) is my life." Well maybe you should reevaluate your life then. Go to games. Cheer. Have fun. Don't be a jerk. Other people are going to the game to have fun too. Be an adult and don't throw crap on the field.