For you folks that are playing in the Tourney on Saturday and those who want to come watch friends play here is the "official" bracket for the teams. 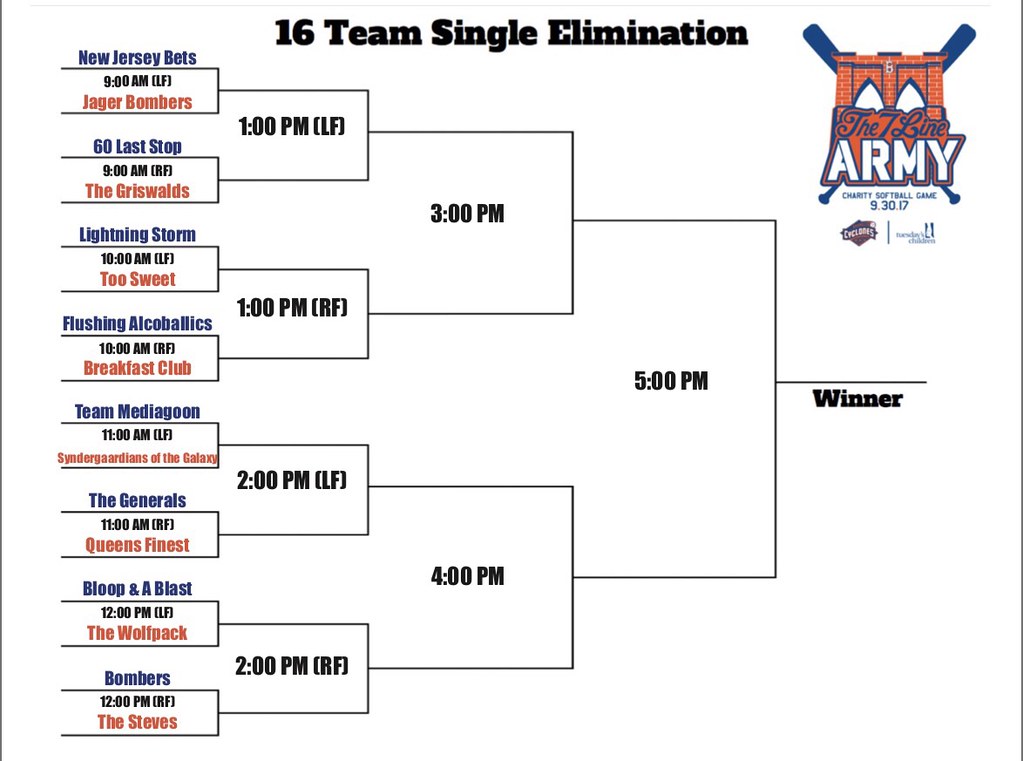 - Need a ticket? You can with buy tickets at the box office at MCU Ballpark in Coney Island the day of or just click here.

Remember proceeds from the tournament will go to Tuesday's Children.


"We finally have our charity picked out. We decided to donate to Tuesday's Children. Thank you to everyone who showed interest in trying to get a team in and helping to donate to a great charity. It would be so awesome to have you folks come and cheer the teams on.

Here is the release from The7line.com


Tickets are now available and the charity has been decided! Funds raised from this event will be donated to Tuesday's Children. We've worked with this great organization on a few occasions and we couldn't be happier to keep that relationship going.

Tuesday's Children was formed in the aftermath of Tuesday, September 11, 2001, and is a response and recovery organization that supports youth, families, and communities impacted by terrorism and traumatic loss.

Their work begins when the emergency response ends – when the true, life-altering impact of the violence sets in. They remain long after other aid organizations and the media have gone. This is their promise to those they serve.

Their proven, long-term approach to helping family members and communities recover was forged in the aftermath of Tuesday, September 11, 2001. Their programs enable their service population to, over time, heal, recover and ultimately thrive.

Tuesday’s Children is proud to offer the same life-changing programs for the military community as they did for those who lost a loved one on September 11th.

We encourage you to come on out to MCU Park in Coney Island to cheer on your fellow Mets fans competing in this inaugural event while raising money for a great local charity."