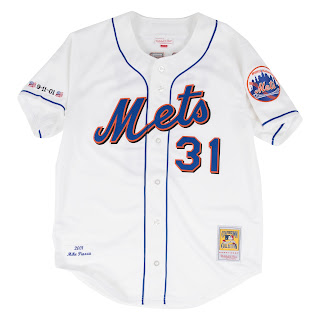 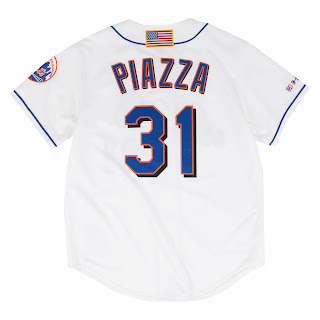 Baseball returned to New York after 9/11 on September 21, 2001 at Shea Stadium. With a stadium full of emotion during the Mets vs. Braves matchup, the Kings of Queens trailed by a run in the bottom of the eighth. Mike Piazza was the city's hero that night, as he belted a two-run homerun that would eventually give NY the 3-2 victory. It wasn't just a win for the Mets that night, it was a win for New York. Piazza's New York Mets jersey from 2001 commemorates that unforgettable night, featuring an American flag patch on the back and 9/11/01 embroidered on the sleeve.
Here is what Piazza had to say on that memorable moment: “It’s amazing, when you’re in the right place and the right time, and you believe in yourself and you have a lot of people pulling for you, and you feel it… It was just this incredible release of emotion, and I think it became evidently clear that people just wanted to cheer — cheer about something.”

This special rendition of Mike Piazza’s #31 jersey releases on September 1, 2017 and Mitchell & Ness will be donating a generous amount of the proceeds to the Families of Freedom Scholarship Fund in order to contribute to the charity’s cause. This organization has given $115,000,000 to roughly 3,000 financially needy dependents of those impacted by the 9/11 attacks and rescue efforts. Click on the link to learn more or donate: http://www.familiesoffreedom.org/