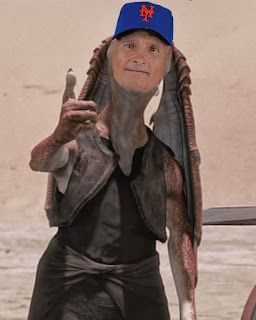 I know I am not the only person who thinks this about Terry Collins. Ready? He is not a good in game manager. He seems to be a great off the field inspirational type of manager. One who will get his team to play for him no matter what the standings are. He has also been saddled over the years with some lackluster players and a ton of injuries but he has also made some really bad lineup and in game pitching changes. But with a quote like this, you can see why folks want to play for him.

“I spent a long time in the minor leagues where I was a guy who felt winning was important even in the minor leagues to teach guys how to play to win the game so that when they get to the big leagues, they did the little things you needed them to do to win,” Collins said before the Mets did what the manager wants with a 6-3 win over the Phillies in a rain-shortened game at soggy Citi Field on Wednesday night.

We never had that Colactus meltdown that @metspolice  and I thought he was going to have. I hope they retain Terry in the organization maybe in the minors to help with development of players.