Guys, guys, guys. Your product on the field for the first time in a few years made the second half of the season mean something. It made it fun to watch the game at the ballpark. The security staff and it seems the ushers made the overall ballpark experience so sucky. I seriously don't get what happened. Seasons before the staff wasn't that friendly to begin with but now it has gotten to the point that they act like they are letting folks into Fort Knox. I travel with  the 7Line Army all over the country to other ballparks and almost every parks staff blows Citi Field's staff away. Get their act together next season will you? 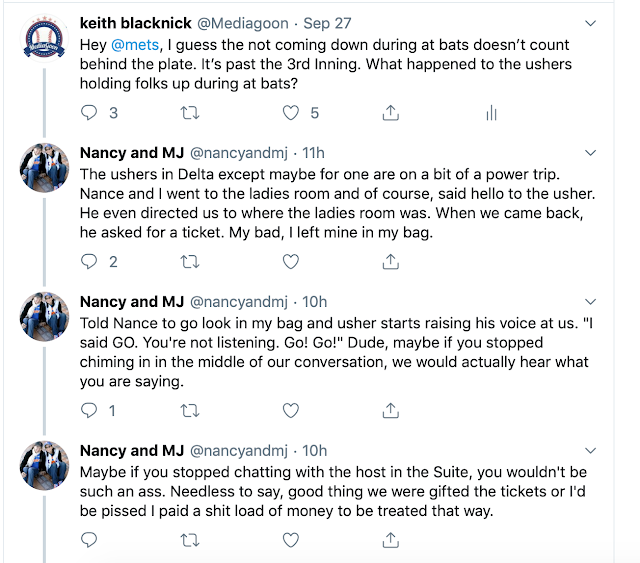 And also here is a letter to a ticket rep from one of this blogs readers.


When I told the people I was with stories about entering Citi they could not believe it. Because they go to other stadiums and events. They are from Douglaston and Garden City. They are patrons of the Bronx Zoo and NYC aquarium. We all went through regular entrances at the zoo. No special entrance. They can easily afford Mets games, but they will now never go. They have children and my grandchildren were among them. The parents will not take them. They have viewed the Websites and twitter feeds I told them to check out about Citi Field security.

Mets, you have a staffing problem at Citi Field. This is going to drive fans away. It made me drop my 1/2 season plan because of all the nonsense the jerky security I have had to deal with this season. Go find the folks who train the amusement park security and get them to consult on the training for the people you hire.