I have been trying to figure out the story of the Guy who got hit in the eye with a t-shirt suing the Mets.

I have been trying to figure out what was going on with this story.


Swanson walked down to the rail, hoping to add another shirt to his collection when the guy operating the T-shirt cannon seemed to be having trouble with his shooter.
The man lowered the muzzle to deal with the issue — and discharged the tightly wrapped jersey into Swanson’s face from 20 feet away.
The doting dad said he was knocked off his feet and fell backwards, hitting his head and blacking out. 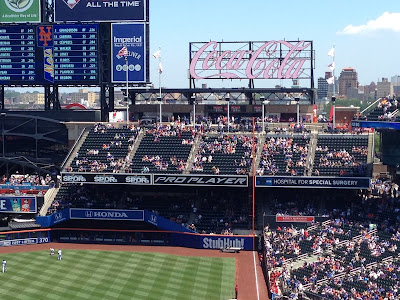 The first row to the field looks more than 20 feet away to me.

Now I am not saying this did or didn't happen but it seems like there are details missing somewhere. Maybe the Mets have to switch to slingshots instead of cannons now? Also as a part of the way stuff works in the cosmos, this was on EYEwitness News.
Posted by Media Goon at 9:28:00 AM