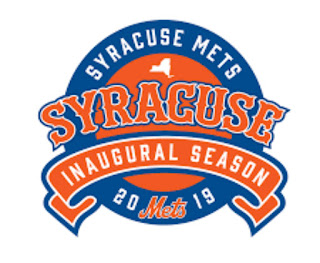 The Syracuse Mets. Day two of my minor league excursion with The 7Line Army is over and what  a fun trip it was. Got to hang with friends in a dfferent setting. I don’t know why but I had more fun at Binghamton then I did at Syracuse in the ballpark. I can see why the Mets want to make renovations at the park. It feels “old” and the Team Store was smaller then it should have been. Not enough merchandise and  it just was over crowded. The staff though throughout the ballpark were super nice and helpful. The food was pretty good for ballpark fare and the field and seats were pretty good too. I just can’t place why there wasn’t more “fun”. Near the the hotel we stayed at was the Destiny mall. The 5th largest mall in the USA and it was pretty fun with the Apex Entertainment and Dave and Busters. So there is some things to do outside the ballpark. If you are in NY state and just want to hit all the Mets minor league teams or just want to see the triple A team then it could be a lot of fun. I just didn’t have “it”.
Oh a quick one. They did Star Wars Night last night and they did a better jobs then the  Proper Mets.
Posted by Media Goon at 9:10:00 AM