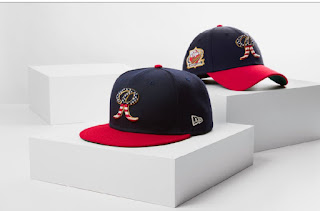 Minor League Baseball Celebrates Independence Day Weekend with Fourth of July Specialty Caps
ST. PETERSBURG, Fla., July 2, 2019 — Beginning tomorrow in select markets, Minor League BaseballTM (MiLBTM) players, coaches and umpires in its U.S.-based teams will take the field in specialty caps to celebrate the Independence Day weekend. Traditionally the largest-attended holiday of the baseball season, more than one million fans will pass through the gates at MiLB games from July 3–7. All MiLB teams will play at home on either Wednesday, July 3, or Thursday, July 4.
The 2019 commemorative Fourth of July caps feature a stars and stripes design emblazoned within each team’s logo outlined with a gold border, while the sides feature the respective league logo and the New Era logo. The cap’s navy crown is accented with both a red brim and a red button. Since the start of the program in 2010 with a standard navy cap and American flag logo motif, the MiLB Stars and Stripes cap has seen many different iterations throughout the years, including this year’s name change.
The unveiling of the Fourth of July cap is the final part of a four-stage rollout of a collection of holiday and special event caps for the 2019 season. In recent months, Minor League Baseball and Major League Baseball has sported specially-designed on-field caps in recognition of Mother’s Day, Father’s Day and Armed Forces Day. All four limited-edition MiLB cap designs are available for purchase in team stores and online at MiLBStore.com.
Minor League Baseball will donate a portion of the proceeds from cap sales to the MiLB Charities Stars & Stripes Fund, created in 2018. Through the Charles K. Murphy Patriot Award, the monies raised through what was formerly known as the Stars & Stripes Cap Program will be donated to local military and veterans’ organizations in Minor League Baseball markets. Over the last decade, MiLB Charities has raised more than $260,000 through this program.
Minor League Baseball Charities is a 501(c)(3) not-for-profit organization dedicated to giving back to and enhancing the communities MiLB teams call home. Through donations and support it receives from fans, teams and partners, MiLB Charities can contribute to local organizations in times of need and support causes that are important to its extended baseball family.
For game schedules and promotional information, or to purchase tickets, visit MiLB.com/schedule. ###
About Minor League Baseball
Minor League Baseball is the governing body for all professional baseball teams in the United States, Canada, and the Dominican Republic that are affiliated with Major League Baseball® clubs through their farm systems. In 2018, Minor League Baseball attracted nearly 40.5 million fans to its ballparks to see baseball’s future stars and experience affordable family-friendly entertainment that has been a staple of Minor League Baseball since 1901. Visit www.MiLB.com, and follow us on Facebook, Instagram and Twitter.
Posted by Media Goon at 12:18:00 PM