Cars getting towed at Willets Point across from Citi Field. What's going on? 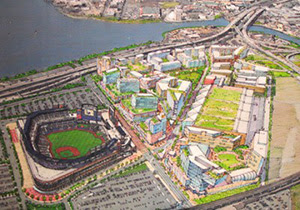 These gates that they have installed around 36th, 37th, and 38th aves, Are they for the parking lots for the air train to Laguardia airport or are they a sign that some construction on the Willets Point. This is the first "movement" of any kind that I have heard of in months over here.

The NYPD wasted little time towing cars off newly demapped streets in Willets Point on Monday, July 8.
Last week, the city Department of Housing Preservation and Development installed gates blocking off Willets Point Boulevard, 38th, 37th and 36th avenues in the industrial area. The roadways, in the shadow of Citi Field, had recently been removed from the official city street grid for potential redevelopment.
The agency also posted signs threatening a tow, a fine and potential jail time for vehicle owners who leave their cars on the demapped streets.
It appears that was not an empty threat.
By 2 p.m. on July 8, three days after the department locked the gates, several cars had been towed from the former streets, according to workers in the area.
About 15 workers in Willets Point gathered around the corner of 37th Avenue and Willets Point Boulevard on Monday afternoon as two police officers spoke with disgruntled vehicle owners whose cars were soon to be towed.
“You never see police over here,” said Tomer Chazbani, a property and business owner in Willets Point. “But now after the gates, they’re here.”

The second part to this story is in another article from QNS.Com is that the business owners are looking for better roads, sewage, street lights, and Street Signs. I thought they were all getting imminent domain eventually. So really, what is going on over there in Willets Point? Why are the politicians doing a walking tour around this area?

While a concrete plan is yet to fall into place, property owners, Department of Transportation officials and members of Community Board 7 gathered in Willets Point on Monday to survey the state of the streets and begin planning for new roads in the industrial park.


But with government officials in front of them on July 8, property owners took the opportunity to air their grievances. “I don’t want to hear a lot of PR stuff,” said Irene Prestigiacomo, a property owner in the Iron Triangle. “I want to hear actual facts.”


The city Department of Transportation (DOT) secured $17 million in funding for road improvements in the crumbling industrial neighborhood in the most recent capital budget.

Towing Company Near Me said...