SNY Documentary on 1969 NYC Championship Teams is on tonight. 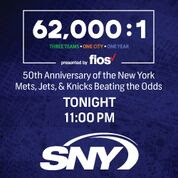