@Metspolice is okay that Todd Frazier is okay with being traded. 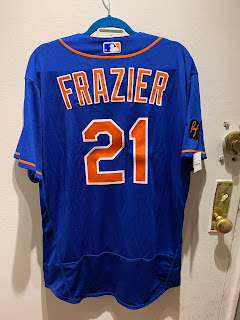 We all know my cousin over at Metspolice.com can't stand Todd Frazier. We all know Shannon is not going to be upset when Todd (Lyin' Todd as Shannon calls him) is traded off the team. Seems like Todd is going to be good with it too.


Todd Frazier’s résumé includes a trade at the deadline two years ago that thrust him into a pennant race, so he certainly knows the drill.


Among the Mets’ non-pitchers, the veteran third baseman might be the most likely traded before July 31, as the team looks for a return on a player headed to free agency.
“If I get traded, OK,” Frazier said Wednesday before going 0-for-4 in the Mets’ 5-1 loss to the Yankees in the Subway Series finale. “If not, I am glad to be here as a Met. I am doing something, so it’s always good to be wanted.”


Frazier entered play 46-for-153 (.301) with nine homers, 27 RBIs and a .925 OPS over his previous 44 games, dating to May 16. He has provided an anchor for the Mets at third base, allowing Jeff McNeil to become an almost full-time outfielder for the club.
But Frazier’s two-year contract worth $17 million concludes after the season, and the Mets are already buried in the playoff race — with just a 9.2% postseason probability, according to Fangraphs, as Wednesday’s play began. Zack Wheeler and Jason Vargas are the other veteran Mets players who figure to attract interest before the deadline.

Question is now, who do the Mets get back. Question number two- Will Shannon like the guys?