You can't have a book bag but you can bring in cosplay weapons to Nats Ballpark? 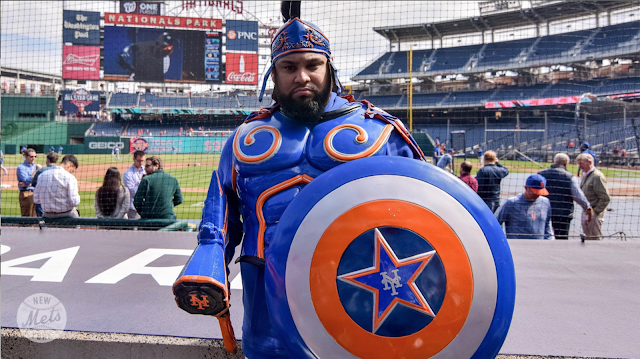 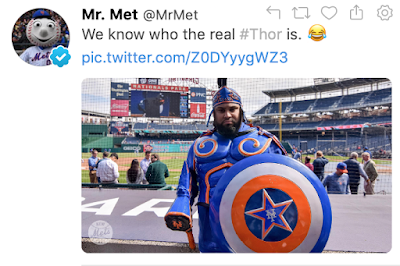 Now, we know how stupid the Mr Met vs Thor thing has become. I used to enjoy it then it got way overplayed. What I really want to focus on though is the fact this guy can go into Nats park like this and you can't bring in a laptop bag. Backpack rules.

Today, the Washington Nationals announced that beginning with the 2019 season backpacks may not be brought into Nationals Park, except as otherwise provided in the Nationals Bag Policy. The policy was revised in order to enhance ballpark safety. Exceptions may be made for backpack diaper bags or backpacks used for ADA/medical reasons. All purses, briefcases, drawstring bags, diaper bags and soft-sided coolers that do not exceed 16”x16”x8” will still be permitted. On the day of purchase, backpacks bought during games or events at Nationals Park will be tagged and permitted for that day only.

So where does the shield fall into?

“The safety of our fans, staff and players at Nationals Park is always a top priority. We are constantly assessing our procedures in an effort to make our ballpark safer,” said Scott Fear, Washington Nationals Vice President of Public Safety and Security. “We understand the implementation of these procedures will take some time for our fans to get used to, but our organization is dedicated to making Nationals Park the safest environment possible for everyone in attendance.”

Does guy running around with rigid plastic props cause more or less damage then someone coming from work with a laptop or camera backpack? More fracking security theater..Oh wait.. I think I heard there a lockers now outside the park where you can store your bags.

Last month, citing safety concerns, the Nationals announced that backpacks will not be permitted inside Nationals Park this season. On Wednesday, the team announced a couple of measures to help fans adapt to the unpopular change, though one of them will come at a cost.
Binbox, a D.C.-based start-up, will make 500 medium- and large-sized storage lockers available at the right field and home plate gates outside Nationals Park beginning with the Nationals’ exhibition game against the New York Yankees on March 25. Binbox founder and chief executive Dan Flynn said the company plans to double the number of lockers available outside the ballpark on game days by June.
[Nationals ban backpacks at Nationals Park]
Medium lockers (10-by-15-by-22 inches) will be available for $2 per hour, charged in six-minute increments. Large lockers (15-by-15-by-22) will be available for $3 an hour. Binbox’s rental fees will be capped at $10 and $15, respectively, each game. The Nationals will not make money off the locker rentals.

Hypothetical scenario. If some shady character decided he wanted to rent some Binboxes with his friends and put bags with maybe some sort of combustable items in it and they were to explode when folks were lining up to get into the ball park, how does that help? 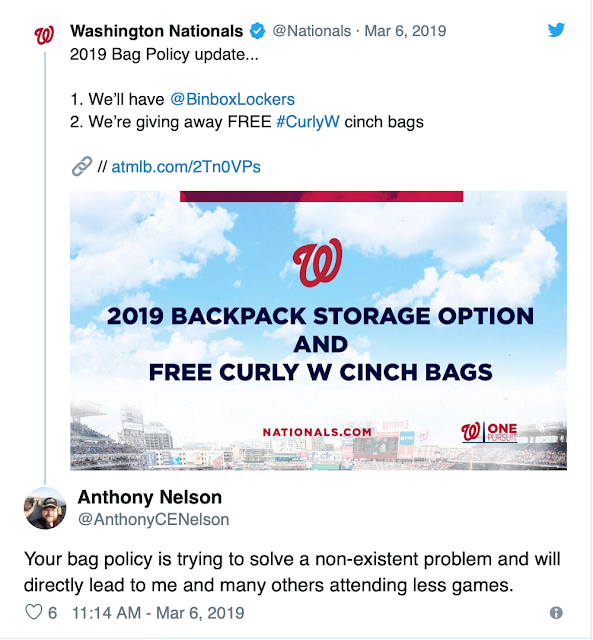