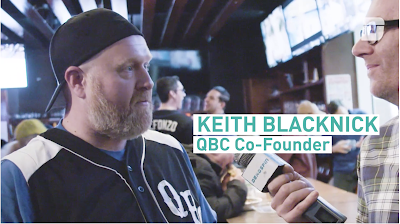 Deadspin came by the QBC this year to see what all the hub bub as about.


The freezing rain that was forecast for later in the day of the Queens Baseball Convention never really materialized. It was still unpleasant out, but this was winter in New York City. It was at least near to the end of the worst part of winter—before pitchers and catchers were even obliged to get to Florida and get serious about their stretching routines, but just before, if still in the fat part of the long annual stretch of low gray skies and wet, dim cold. There are days when the mess seemed to come out of the sky as slush, gray and in-between and miserable from the moment it touched the ground. There were weeks like that. There are always weeks like that. If you are going to throw a party for the fans of a benighted local baseball franchise, with panel discussions and question-and-answer sessions and memorabilia shopping and autograph procurement and general beer-adjacent afternoon hanging out, that part of winter is probably the best time at which to do it. It’s when everyone needs it most.


No one went to Katch Sports Bar in Astoria, Queens, on a February day that promised shitty weather, because they had to. Every one of the many Mets fans there was there because they chose to be there—to be around other people that chose to give this ridiculous and singular team some say in their emotional wellbeing, think and talk about that team, and drink beers if they wanted. Todd Zeile would be appearing on a panel later in the day and Darryl Strawberry was signing autographs and periodically loping through the bar area. In the back, you could purchase a game-worn Aaron Sele or Tony Armas Jr. Mets jersey for what I would describe as a very reasonable price. Mr. Met was in the building, projecting a gravitas entirely disproportionate to the size of his tremendous baseball head. And I was there, although no one was paying for that along with the price of admission, to ask my fellow Mets fans why they keep coming back to this particular team.