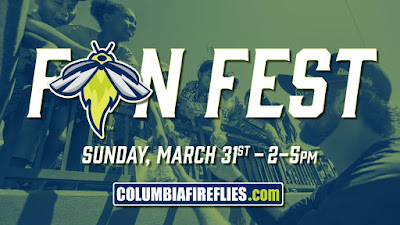 The Columbia Fireflies invite all fans out to Segra Park for Fan Fest on Sunday, March 31 from 2:00p.m. to 5:00p.m. Admission is free, and Fan Fest will be the first chance to see the 2019 Fireflies in action.
Fan Fest 2019 will feature behind the scenes tours of the ballpark as well as post-practice run the bases for all kids. Fans can stop by the Mason Jar Team Store and shop for new Fireflies and Chicharrónesgear before the start of the season. Segra Park concession stands will be open for the duration of the event, and all concessions will be half off, including draft beer. The SCU Kids Zone will be open and free for kids in attendance, and dogs are welcome to attend the event as well.

The Fireflies Ticket Office will also be open during the event. Fans can purchase single games tickets and full or partial season ticket packages. Those who purchase season tickets will be able to head out to the seating bowl to pick their seats based on those that are available.

"Our fourth season at Segra Park is upon us," said Fireflies team president John Katz. "We are excited to welcome our community back to the ballpark to meet the team as we get things rolling with new promotions, new food and even more fun."

Opening Day for the Columbia Fireflies is April 4 at 7:05p.m. against the Charleston RiverDogs (New York Yankees). Individual game tickets for the entire 2019 season are on sale now and can be purchasedat the Fireflies box office, over the phone at 803-726-HITS, or online at FirefliesTickets.com.

Season ticket packages are available for the 2019 season. Reserve your seats by calling the Fireflies box office at 803-726-HITS or visiting ColumbiaFireflies.com for more information. Plans start as low as $70 and include guaranteed giveaways for season ticket members.
Posted by Media Goon at 10:04:00 AM