d'Arnaud speculations from Main Stream Media (they finally are catching on) 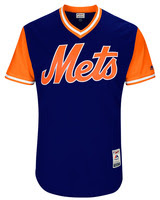 Mickey Callaway said d’Arnaud would DH both Sunday against St. Louis and Monday when the Mets play split-squad games versus Boston and Houston before catching in a game if all goes according to plan.
The manager said the Mets would “continue to work him in [at DH] and see him after that behind the plate at some point.’’
D’Arnaud said he had completed all the steps necessary to get back on the field and Callaway added that the final steps included “live throwing, [facing] live runners, getting his footwork synced up. He’s doing really well.”
The catcher’s status remains uncertain, even if he does prove himself to be healthy.

The Mets added Wilson Ramos in the offseason on a two-year deal worth $19 million and signed Devin Mesoraco, a favorite of NL Cy Young winner Jacob deGrom, late in the offseason.

So when does Mesoraco get hurt and it is all about Thank God we had Travis all along.

Brandon Nimmo, sidelined by a virus that was initially thought to be food poisoning, was back in the clubhouse Saturday after the team told him to stay away Friday because he was still contagious. He planned on hitting and throwing Saturday.

Did Jose Reyes aka The Virus sneak in and get Nimmo sick?