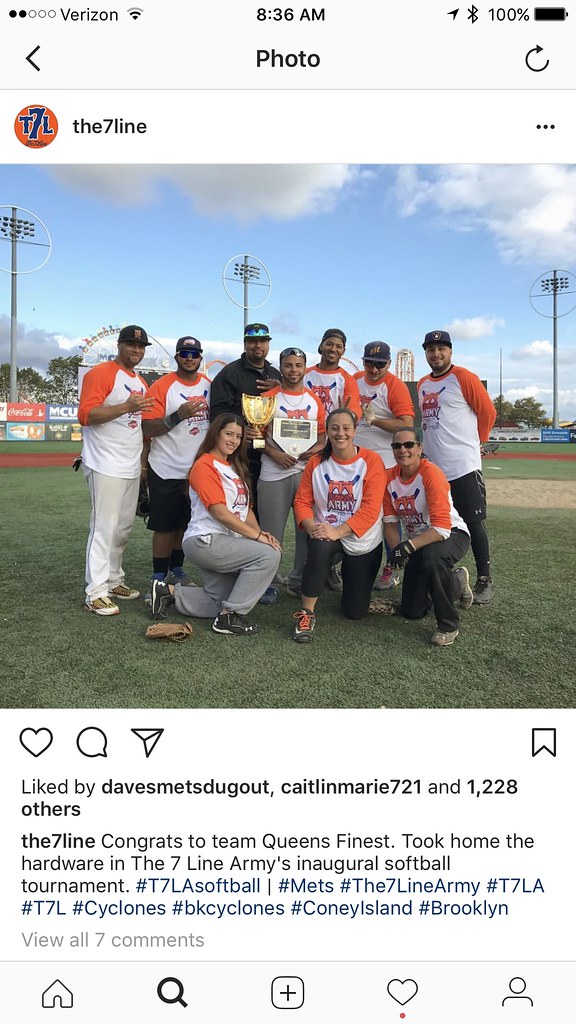 Congratulations to the Queens Finest for winning the First Ever T7LA Softball Tournament. Okay got that out of the way.
For the most part yesterday was a fun time. Team Mediagoon got knocked out in the first round to a team that just outplayed us. I had a Montero type hiccup game where I gave up two moon shots in the first inning and I couldn't convert a play in the second to third. The scoring floodgates opened against us but we had fun playing and losing to a team that wasn't an organized team.

The BK Cyclones and Greg from the Cyclones who helped us put this together were very accommodating and put together a great event for Charity. Thanks again Greg.

I want to thank the Mets and the Social Media Team over in Flushing for donating two tickets and a hang with the Social Media crew pregame at Mets home Game next season. I want to thank my ticket Rep for donating a game Used Base to the auction. The cast at Gotham came through with some signed things and that also helped bolster the donation of $1000 that we raised from just the auction alone to give to Tuesday's Children. Thanks to everyone who bid and won.

Now on to some business. As one of the organizers of the event, I was dismayed to find out that there were "organized" teams in the tourney after we explicitly said no organized teams. Just because it was a tourney event it wasn't supposed to be for prestige of winning a trophy, but for friends to have fun in a recreational fun type tournament. I'm not going to throw any of the teams under the bus here but it defeated the purpose of the whole day. Darren and I tried to do our due diligence when we put this tourney together and tried to make sure no "real" teams were involved. Don't take this as "he's just mad because his team lost", I didn't think my team was going to go to the finals (not a knock on my team btw), I put together a team of friends that I knew would enjoy being at the ballpark and have a chance to play in something like this.

Darren and I are going to try to figure out a better way next tourney how to make sure "organized teams" don't get involved.

All in all it was a good day though, got to play on a legit Minor League field, raised money for charity and then hang out with our friends. It was a learning experience and we will be ready for the next one!

Posted using BlogPress from my iPhone
Posted by MediaGoon at 9:16:00 AM