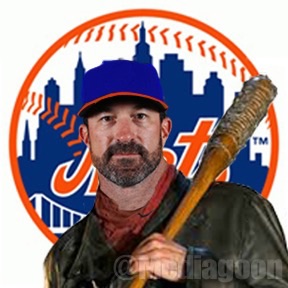 Before the the season ended, I heard that Long wasn’t going to be back with the Mets. I was surprised that the Mets were even interviewing him for the manager job. Did the Mets do this to placate Long and hope to retain him as the hitting coach by showing him that they “value” him?

Kevin Long isn’t necessarily finished with the Mets, but he is exploring other options.

An industry source confirmed Monday that Long, who was among the Mets’ managerial candidates — the position that went to Mickey Callaway — has been given permission to speak with the Nationals about their open manager position.

If Long, who has spent the last three seasons as the Mets hitting coach, were to depart for Washington, it would reunite him with Daniel Murphy, whose career began skyrocketing late in the 2015 season under Long’s tutelage.

Long back with Murphy eh? Can you imagine if he tweaked Murphy anymore? The two of them could be the ultimate Mets killers.