NY Times talks about how old the Syracuse Mets are. 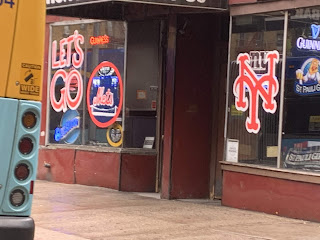 I am just glad someone is writing something different for a change. The Times is looking at how the Mets have stockpiled older former Major Leaguers in Syracuse as insurance policies in case they are needed for injuries etc.

From The NY Times.


The access to former major league stars was a big draw for many fans who frequently attended games this year, said Jen Zingaro, a Mets fan from nearby Liverpool. After home games, dozens of autograph seekers wait outside NBT Bank Stadium — a nondescript field shadowed by tall trees, weeds and random moving trucks parked beyond the outfield wall — with binders full of cards featuring Syracuse Mets players from their major league stops.
Attendance has been up more than 22 percentcompared to last year, when the franchise was affiliated with the Washington Nationals. In mid-June, Syracuse reported an average paid attendance of 4,505. (The presence of Tim Tebow has likely helped, too — football apparel featuring his name was still in vogue at home games until a hand injury in July knocked him out for the season.)

The Mets last year was a barren waste land when players were getting hurt. Players were being rushed up when they weren’t ready yet and that whole trek from Vegas sucked. So far it looks like Syracuse is working out for the Mets as a Triple A spot which makes it a lot easier for the Mets to call up players and get them to Citi Field quicker.
Posted by Media Goon at 6:52:00 AM