I am in Kansas City 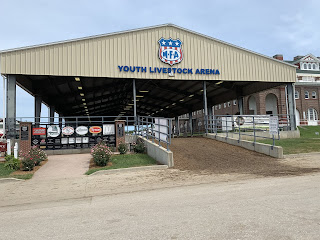 Got delayed at the airport yesterday morning for a bit. Still made it to KC early in the day though. Drove two hours to the Missouri State Fair. Everything in the town there was named State Fair. Like State Fair Shoppong plaza and State Fair college. It was definitely an experience. Had a nice older couple stop us to ask if we were in town for the Mets/Royals games and when we said yes they said it’s a nice ballpark and we should have a good time. When we also said to them that there’s was 1200 of the T7LA coming they couldn’t believe it. Drove back two hours to KC and met up with some friends to watch the Mets game at McFaddens. They had the MLB network on and it was showing Braves/Mets. Can I just tell you how mystified and annoyed I was that Gagnon was left in for all that time. It was driving me crazy. Thank God they pulled it out. After that game I went to the”speakeasy” in my hotel that they front dash told everyone about. I needed a drink.

I think I am going to hit the Negro Leagues Museum today before the game. I really want to check that out. Then tonight I have seats in the dugout suite next to the Mets dugout. It should be a fun time.

I’ll try to check in during the day.