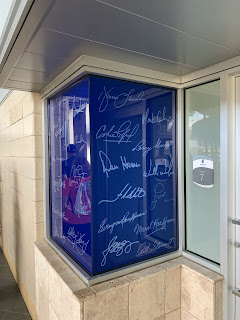 When we were sitting in the Dugout Suites the other night in KC, there was a jersey hung up on the wall. It was Dennis Leonard’s. Next to us in the other dugout suite guess who happened to be there doing an appearance? That’s right Dennis Leonard. He wandered over to our suite to hang for a bit too.

Here’s some info from Wikipedia about Dennis.

Born in Brooklyn, Leonard attended Oceanside High School on Long Island, then played college baseball for and graduated from Iona College. In 1975, his first full year with the Royals, he achieved a 15-7 record.
Leonard later recorded three 20-win seasons, to become the only pitcher in Royals history to do it.[1]Besides, he started nine post-season games for the Royals between 1976 and 1981, ending with a record of 3-5, including a 1-1 record in the 1980 World Series against the Philadelphia Phillies.[2]
From 1975 to 1981, Leonard won 130 games, the most by any right-handed pitcher in Major League Baseball.
Towards the end of his career, Leonard missed most of the remaining seasons due to knee injuries. His final season was in 1986, where he ended up with an 8-13 record.[3] Besides his rookie season of 1974, this was the only time he had a losing record. At the end of the 1986 season he retired as a player.
Leonard finished his career leading the Royals all-time list in complete games (103) and shutouts (23) and he was second in wins (144). He also held the club's single-season bests in starts (40), complete games (21) and innings pitched (294.2) and strikeouts (244).

Dennis was really cool to talk to. He was associated very happy to see some NYers and was impressed about how well Mets fans travel. He also had some great stories, talked to us about the Royals team in 1985 and was just fun to talk to. Never know who you are going to run into on these trips.
Posted by Media Goon at 6:52:00 AM