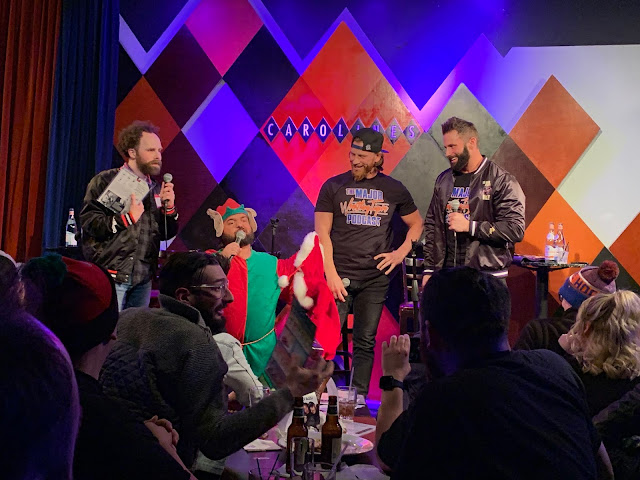 I am a collector. I collect a few different genres. One of those genres is wrestling figures and wrestling belts. A great podcast to listen to is The Major Wrestling Figure Podcast hosted by Curt Hawkins and Zack Ryder. It's been a fun pod where they talk about their figures when they were growing up and their current collections. The pod has had some WWE superstars on the show, as well as the guys from Hasbro who currently have the WWE license. The fellas have been having a twitter/pod feud with Sam Roberts from the Jim and Sam morning show on SiriusXM. You also might know him from the WWE PPV pre shows, The Not Sam Wrestling Podcast, and also formerly of The old Opie and Anthony show.

The live show was at Caroline's Comedy Club in NYC. It was my first time ever in this room and the two podcasts drew a decent crowd for a Wednesday night in February. I don't know how much of this show is going to be aired on their shows so I don't want to ruin too many of the surprises but there were some fun ones. One of the surprises that was pretty sure to show up though was Dylan Postle(Hornswoggle) and I have to say this guy is freaking funny as hell. The quick one liners were sharp and on target. I couldn't believe some of the stuff that came out of his mouth. From the looks of it, neither could any of the guys on stage. There were run ins from Create A Pro wrestling. There were give ways. There was Zombie Claus? Sam Roberts long lost brother was there.And there was a quick cameo from a former WWE Superstar (one that Ryder really marked out over). The crowd marked out over him to. The hint to figure out who this is would be found Around the Stars.

You could see that the fellas were really enjoying being there and interacting with each other and the crowd there were some great lines that killed, KILLED the audience. I ended up hanging out with Joe DeMayo(@PSLtoFlushing) and his buddy Mike during the show and we couldn't stop laughing. Joe and Mike(from their seats) had some great one liners themselves that popped the crowd and the guys on the stage. It was a great interactive event.

For a first time show, Sam, Zack, and Curt did a great job. I know I didn't give this show (Sid) Justice with this write up but I really don't want to give up any of the surprises. It was super enjoyable and if they do another show, you guys should go.

Click here for NotSam Wrestling Pod.
Posted by Media Goon at 8:20:00 AM