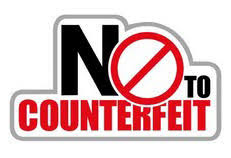 Who does counterfeiting hurt? The folks who buy the tickets and get scammed. The people who by gear that falls apart. The people working in sweatshops over seas. Then let's not forget about the illegal crime organizations and terrorists it helps fun. I have been hearing rumors when NIKE takes over the MLB uniform production that they are relentless in trying to stop fakes.

To begin with, counterfeiting is illegal.  It's a violation of intellectual property rights.  MORE IMPORTANTLY it's immoral.  By supporting counterfeiters, you are supporting some ofthe absolute worst human beings on the planet.
Are they bad because they counterfeit jerseys?  No.  They're bad because they're also involved in counterfeiting money, counterfeiting prescription drugs, trafficking illegal drugs, and even worse, these international criminals are involved in human trafficking which I consider one of the most abhorrent crimes imaginable.  On top of that, purchasing counterfeits hurts the American retain economy.I've heard several arguments on the pro-counterfeit side.  I'll now deconstruct them.1.  "The NFL charges too much for jerseys!"Nonsense.  It's all a matter of what the public is willing to pay, plus supply and demand.  If you don't like the price, don't buy the jersey.  Rolex charges a lot for a watch too--far too much for my taste, so I don't buy it.  There are other watches out there.  In the same vein, there is plenty of other NFL merchandise--tee shirts, sweatshirts, hats, that are FAR LESS in price than an authentic jersey.  Why not wear officially licensed, yet less expensive stuff?Secondly, if you REALLY want the jersey,  earn the proper amount of money to pay for a legitimate jersey.  Bragging about your phony jersey is pathetic.  2. "My phony jersey looks real!"No.  Your phony jersey looks phony.  NFL fans with an eye for detail can spot fakes a mile away.  They're like bad boob jobs from the 1980s.  Ironically, just like the bad boob jobs, only the jersey wearer thinks the jersey actually looks real.3.  "Nobody gets hurt except the NFL."Not true.  American retailers get hurt.  Legitimate manufacturers get hurt; even if they are overseas they are still abiding by the law.  And again, counterfeit goods fund international criminal cartels who do business in some of the WORST crimes imaginable, including human trafficking.  Additionally, do you honestly think that the folks manufacturing these jerseys care what kinds of materials they're using?  If your jersey is loaded with lead or some other toxic material, what kind of legal recourse will you have?  NONE.  In short, if you're thinking of handing over your money to international criminals, please reconsider.  Get a nice polo shirt or sweatshirt instead.  Trust me it will look far better than any phony jersey you can buy.  You don't need to wear another man's work uniform anyway.  (Adults who do are kind of sad, actually.)