As they say in showbiz- The Show MUST go on!
From The7line.com 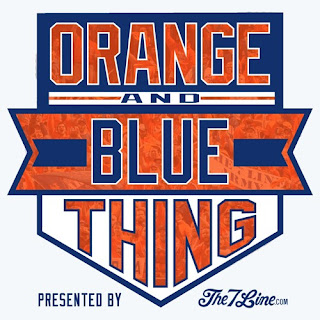 If you haven't heard by now, Brian is moving on from Orange and Blue Thing. I had a great time hanging with him each Thursday night as we talked Mets, and shot the shit with all you fans. Unfortunately as the saying goes, all good things must come to an end. I wish him all the luck in the future, and thank him for all the work he put in during his time here.

This Thursday I had planned to bring on Josh Oshinsky (VP of programming for Sports Illustrated) as a guest through Skype. Instead, Josh will now be my co-host for the evening. Josh and I go back a few years now, and I'm sure you'll have a fun time spending the hour with us. He has some big news to share, and what better way to do that than over a few beers live on a Thursday night.

After that. I do want the show to go on. I look forward to it each week, as I know a lot of you do too. Thursday's have become my therapy to an extent. Sip a cocktail, let loose, vent about the last week of Mets baseball, give some free stuff away. It's fun. I like fun. Let's keep having fun.
But. I need a co-host.

Here's where you might come in. If you think you have what it takes, here's your shot. I'm not looking for any specific type, but there are some things to consider if you want to apply.

Send a 2 minute or less video to darren@the7line.com. You don't have to go overboard with it. Even selfie style on your cell phone is fine. Hit me with the basics. Name, age, where you're from, why you want this job, what can you bring to the table. Anything you think I might wanna know about you.
Yes, it's a paid gig. If the shoe fits, I may even have some work for you outside of the show. One thing at a time though.

I'll be interviewing the prospects and trying out the best ones on Orange and Blue Thing. As the process comes to a close we'll be broadcasting a live show from Mulcahys where a new co-host will be hired.
Posted by Media Goon at 12:06:00 PM