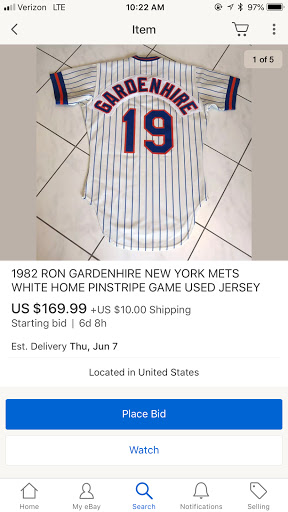 This auction is for a highly collectible New York Mets game used jersey worn throughout the 1982 season by former shortstop and current Detroit Tigers Manager RON GARDENHIRE. "Gardy," who is best known as a coach and manager of the Twins (1991-2014), was the Mets shortstop from 1981 to 1985.

This jersey is from the last year of the Mets' 2-button pullovers (1978-1982). It is a white home jersey with blue, orange and blue alternating stripes along the neckline and both sleeve endings. The classic script Mets logo is sewn across the center in blue tackle twill material, bordered by orange. Beneath the team logo is Gardenhire's number 19, sewn on in the same 2 layers of twill.

Inside the neckline are:
1) the authentic Rawlings manufacturer tag only found on Major League gamers, which contains the wash instructions as well as the size of the jersey (40).
2) the embroidered strip tag that reads: 19 82 1 (player #, year, set 1)
3) the set flag tag that reads "Set 1 1982" (this is amongst the first set of jerseys issued to the players in 1982)

The back contains a large # 19 in the center, sewn on in royal blue tackle twill material, bordered by orange. Above the number is the name GARDENHIRE, sewn onto a nameplate that is affixed to the jersey.

The jersey is original apart from the nameplate, which is a 100% accurate professionally done restoration (the Mets commonly stripped nameplates off of their regular season jerseys after each year in order to recycle them through the minor leagues). The jersey shows very heavy use throughout, with letter and number puckering, tag wear, dirt staining, and thread wear. It is fantastic Mets collectible jersey, and would make a fantastic display piece!!!