Have we found out where the donations are going for the Memorial Day Unis/Merch? 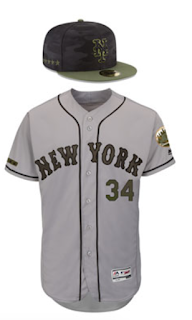 My cousin Shannon from over at Metspolice.com pointed this out to me.

Looks like we might have finally got an answer about the donations from the unis/caps being worn on Memorial Day. There was quite a few of us over the years asking about this. Where was the money going? No one ever had an answer. You can also read a post about this from last week here.


In March, baseball’s vice-president of social responsibility, Melanie LeGrande, reached out to James Wright, the former president and a professor of history at Dartmouth College.The subject: How baseball might more accurately capture the significance of Memorial Day.Starting in 2008, the sport had used proceeds from sales of Memorial Day commemorative apparel to fund the Welcome Back Veterans initiative — a worthy cause, but one only loosely tied to Memorial Day, which honors those who died in combat.By aligning with two new charities for this Memorial Day — charities supporting children and families grieving the loss of a service member — baseball is responding to criticism of its previous efforts and showing a better understanding of the holiday.The charities baseball selected — the Tragedy Assistance Program (TAPS) and Folds of Honor Foundation — will receive 100 percent of the royalties from the sales of Memorial Day apparel, league officials said. Royalties are the amount of money baseball receives from a licensee for the use of its marks; they are correlated to sales, so the more merchandise baseball sells, the more money it donates. The sport has pledged a minimum $500,000 collective donation.“They let us know that they felt Memorial Day belongs to those who served and died,” said Diana Roday Hosford, the vice-president of sports and entertainment for TAPS. “They wanted to recognize organizations that supported the surviving families left behind after a life of selfless service and sacrifice.”


You can read more of this if you have a subscription to theAthletic.com
Posted by Media Goon at 4:59:00 PM