Working a “Perfect Game” Conversations with Umpires By Bill Nowlin 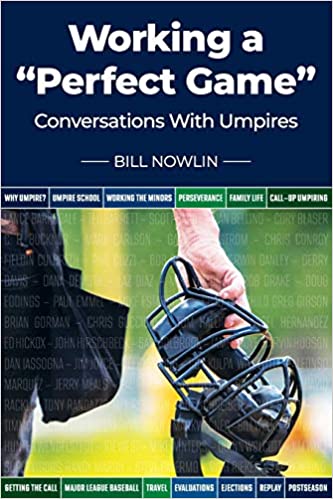 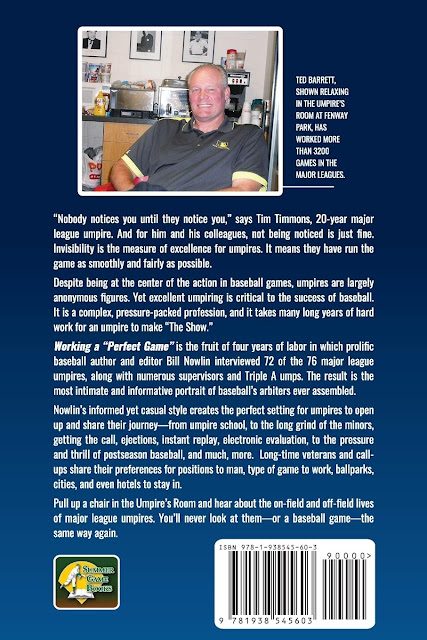 You guys ever want to know what it takes to be an Umpire in professional baseball? What it takes to become one? What happened when you do become an Umpire what you have to deal with? The traveling, the hustling, dealing with players, fans, and managers? Well it's here.

From the forward by Larry Gerlach


Questions abound. What motivates someone to become an umpire? How does one become a professional umpire? Why do so many umpires for so many years endure the rigors and low pay in the minor leagues knowing the odds of reaching the major leagues are great? What it is like traveling from city to city during a season that stretches for seven months from February throughSeptember—and beyond in some cases? How does an “on-the- road” job impact their personal and family lives? What are the reactions of witnessing first-hand great players and performances and participating in World Series and All-Star games?

I often wondered about this when I have seen Umps working the games. One of my friends when I was in College wanted to become an Umpire but he ended up becoming a Science teacher/Phys Ed teacher because he couldn't break in.

Here's the intro because I know I can't wordsmith it better than Bill.


Introduction
Working as a major-league umpire is a tough job. You’re on the road almost constantly, hardly ever home. You’re in the spotlight almost constantly, berated or challenged if a call is questioned, but almost unnoticed, overlooked, and forgotten if all your calls are correct. You’re working to enforce the rules of a game in which the minimum wage for players is greater than any amount you can hope to achieve. When the game is over, the players and coaches have a group 30 or more teammates to choose from to socialize with. They are in their home park half the year. Their homestands typically last a full week and sometimes 10 or 11 days. You’ve got three fellow umpires, maybe a friend in town, but twice a week you’ve got a plane to catch to get on to the next city.
There are benefits, though. There is a real camaraderie within the umpiring community, one that includes fellow umpires but alsofamilies and friends. You’ve made it to the top of your profession. You’re part of The Game, a game you’ve come to care deeply about. You get pretty good pay by most standards, and a job that is pretty secure once you make it. Your career can last longer than the typical ballplayer. There are inner rewards, too, satisfaction after a game in knowing that you had positioned yourself properly and made the right calls. For the right person, it’s a good job, even something of a calling.
Becoming a major-league umpire, though, is far from an easy road. It takes years and years of dedicated effort. You’ve got to excel at umpire school and then serve what usually amounts to about an 8-to-10-year apprenticeship, working your way up through the minor leagues, working under more basic conditions, for very little money, with no job security, and being constantly evaluated and graded at every level as you rise in the ranks. Most wash out – even very, very good umpires. Ron Kulpa told me that on his first day of umpire school one of the instructors said, “Look around the classroom. Usually only one person per class makes it to the big leagues.” There were 182 people in the room.
It is probably worth mentioning right off the bat that a minor- league umpire typically earns between $2,000 and $3,900 per month, and for a shorter season than major-league umpires have. Major-league umpires, however, are much better paid – earning range, largely depending on seniority, from $120,000 to $450,000. Benefits such as per diems and vacation are described in the book. In 2019, the minimum major-league salary for a player was $555,000. Salaries for both groups are set through collective bargaining, and will likely change over time.1
Becoming an umpire takes perseverance. It takes grit. Some have been fortunate, and through the timing of retirements and the like, have made it to the majors earlier than others.
Others have had obstacle after obstacle thrown in their way. And some had bad luck with timing.
The goal of it all, veteran major-league umpire Tony Randazzo once told a writer for the Chicago Tribune, is to have a perfect game. He didn’t mean what everyone else thinks of as a perfect game. “I love umpiring because it’s never the same. Every day is different. I couldn’t have a job and sit behind a desk for eight hours. That’s just not for me. Every three days I’m in a different city. I’ve traveled all over the United States and met some great people. Plus, I like the challenge. I want to have a perfect game.”2
Clearly that could be taken more than one way. Asked to explain, he said, “We all strive to get everything right. We want to geteverything right. As far as balls and strikes, safes and outs, all that stuff. We don’t want to miss anything. That’s what I meant by a perfect game.”3
-Bill Nowlin Cambridge, Mass February 2020

Now you have the basic knowledge of what it takes to be an umpire and what they make in the different levels of baseball. Want some very cool stories about what has gone on with an umpire during a game?

Umpire Phil Cuzzi talks about how he likes well pitched games because it keeps you sharp. He also talks about his life before becoming an ump.

Umpire Ed Hickox is a Police Detective in the offseason.

Bill talks to an Umpire Crew of Ted Barrett, Angel Hernandez, Chris Conroy, and Pat Hoberg about the crew itself and how they handle moving some of the crew members in and out during the season when other crews needed to "beef" up there crews or someone went on vacation.

Okay I am not going to give the whole book away. Bill Nowlin's easy writing style makes the book fly by and makes you feel like you are a part of the interviews/conversations. Just trust me on this and buy this super insightful book. I wish this was something that was around when I was in High School or College because after reading this, I think I might have tried to go to Umpire School and become an Ump.

You can grab it at Amazon, bookshop.org, Barnes and Noble, and other retailers.
Posted by Media Goon at 10:54:00 AM