Fox Sports is going to have virtual fans on it's MLB Broadcasts.

This is cool and it will look basically like playing MLB The Show. The cutouts make me feel like I'm
watching a video game also. A video game from the late '90s with the cutout audience. I guess if you
bought a cut out at a stadium you aren't going to see it on FOX.

No fans? Not on FOX Sports. 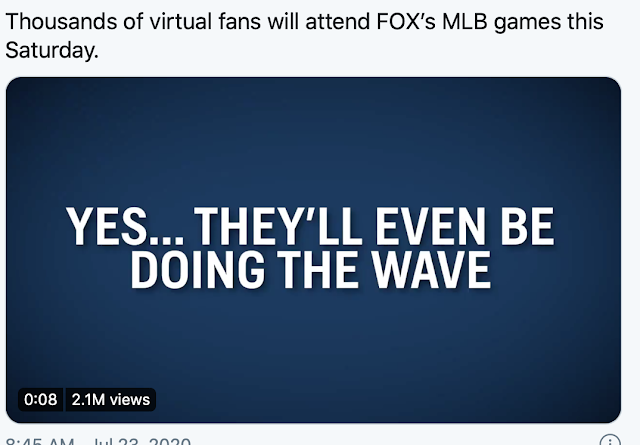 NO. We don't want the wave in real life.

The effect is a combination of technologies you may have seen before. The augmented reality software used to insert the crowds is called Pixotope, which has worked on AR graphics for things like the Super Bowl and The Weather Channel’s terrifying storm warning demonstrations.


It works by leveraging graphics (created by creative agency Silver Spoon Animation) built in Epic’s Unreal Engine. Unreal Engine is used here for the same reason it’s popular for creating video games or for crafting virtual on-set backgrounds for shows like The Mandalorian. Unlike most film graphics, which have to be rendered in post-production after the fact, Unreal can render in real time, making it far more suited for live television.Fox Sports producers will be able to control things like how full the virtual “crowds” are for a given game, what weather fans are dressed for, and what percentage of the crowd will be home fans versus away, although the company is still figuring out how it’ll make some of those decisions. “We’re figuring this out right now, and we’ll continue to evolve that process as we go through this weekend and from game-to-game, week-to-week,” says Zager.


The Fox Sports broadcasts will also integrate the feigned fan audio being played in the stadium into the background of microphone clips from the players (like during pitches) and other in-game audio, but it’ll augment that live audio on its own end, too, similar to how it’s been doing for MLS games.