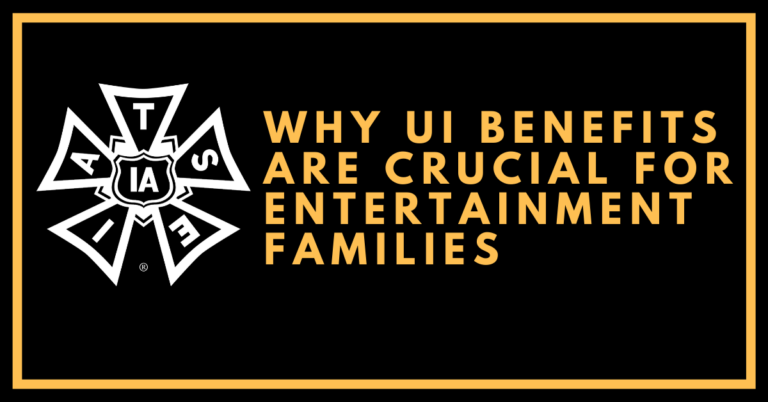 NEW YORK, NY — As the COVID-19 pandemic rages on in much of the United States, the entertainment industry

and behind-the-scenes workers continue to be disproportionately impacted by the health crisis. Most entertainment workers who found themselves out of work practically overnight in mid-March due to COVID-19 related cancellations across all sectors of the industry are still waiting to safely return to work.

While significant progress has been made in the development of industry-specific safety standards and guidelines to provide safe workplaces in a pre-vaccine world, many entertainment jobs will be among the last to fully return because of necessary safety restrictions and limitations on mass gatherings. The expansion of federal unemployment insurance (UI) benefits in the CARES Act have been critical to financially sustain IATSE members until a safe return to work is possible, as current state UI benefits tend to be insufficient for entertainment workers.

However, the Federal Pandemic Unemployment Compensation authorized by the CARES Act – the $600 weekly UI federal supplement to state benefits – expires on July 31st without Congressional action.

The HEROES Act, which passed the House of Representatives on May 15, extends the CARES Act’s UI provisions through January 2021, but the bill has not been taken up by the Senate. The HEROES Act also addresses most of IATSE’s subsequent COVID-19 legislative priorities.

Call your Senator and tell them to support the HEROES Act

The $600 weekly federal supplement is a necessary lifeline allowing entertainment workers and their families to continue to pay the bills and keep food on the table during an unprecedented crisis. For most, even these expanded UI benefits don’t come close to replacing the wages they earned in highly-skilled entertainment crafts. Congress must extend the CARES Act’s unemployment insurance provisions for as long as the health crisis persists.

Entertainment workers have come together to share their stories about Why UI Benefits are Crucial For Entertainment Families: 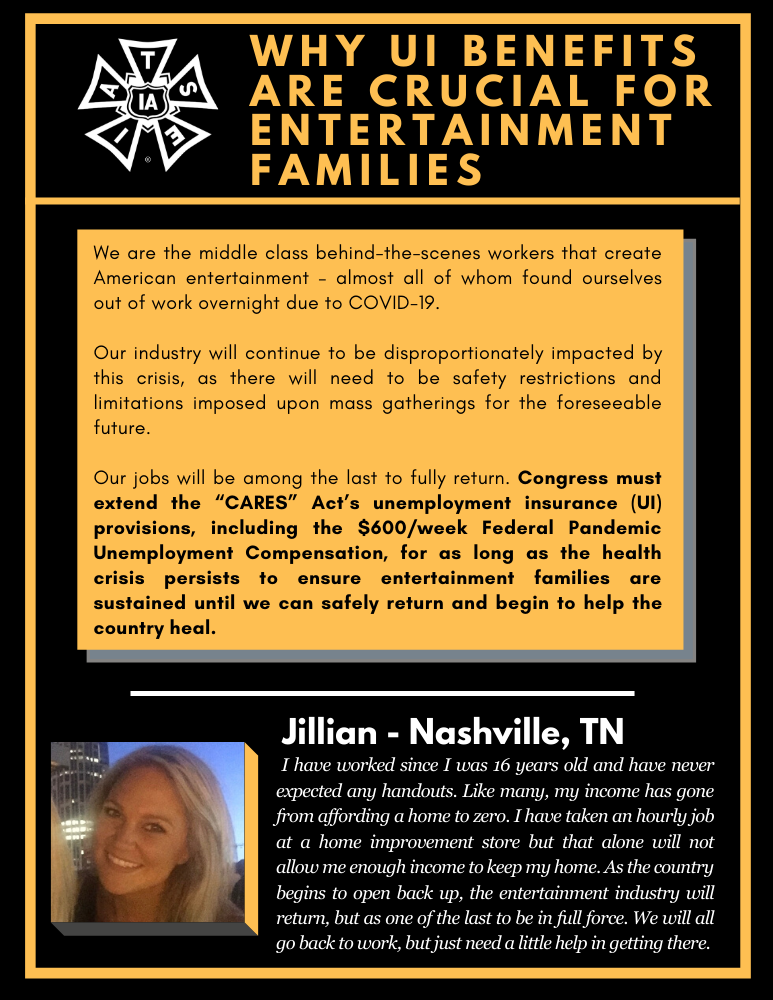 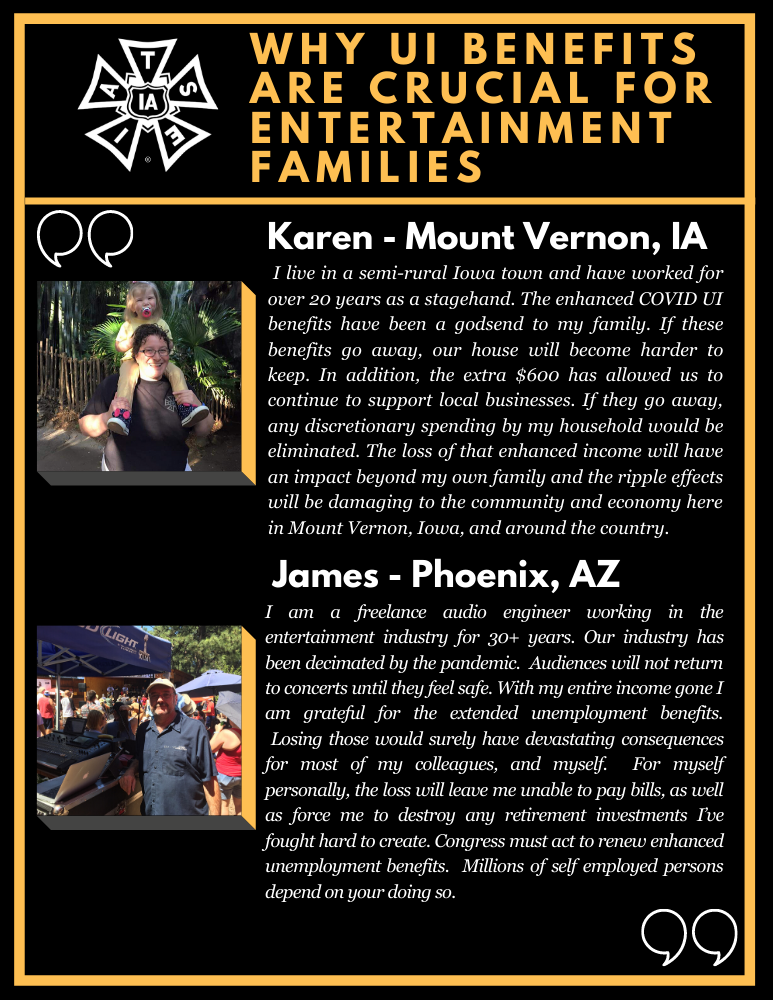 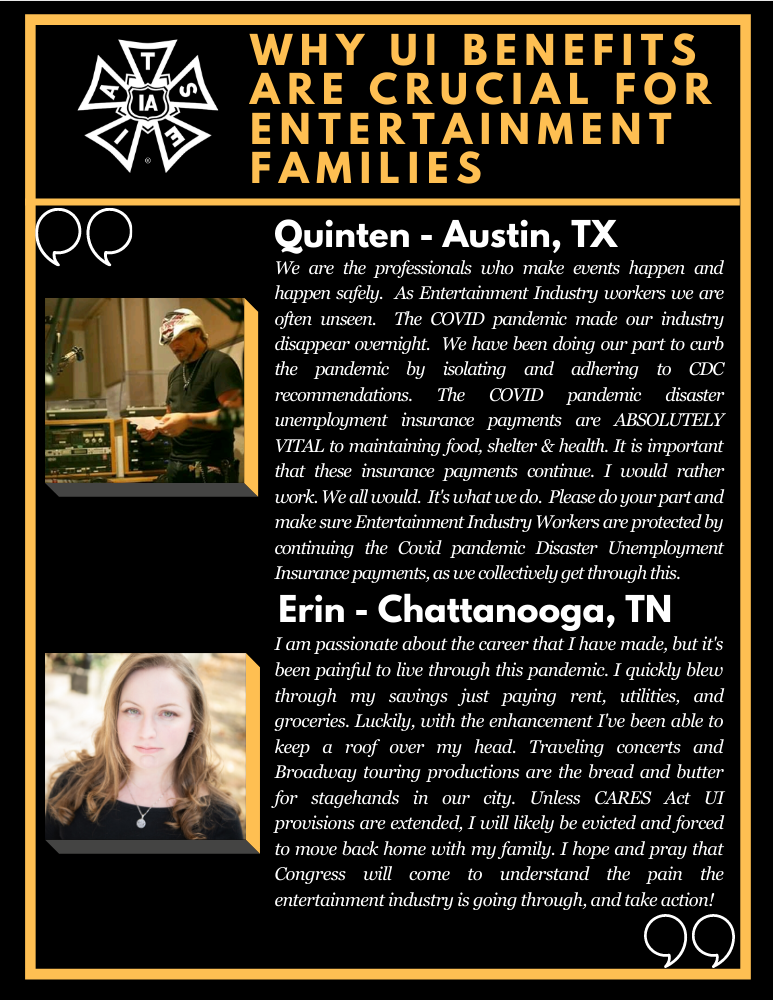