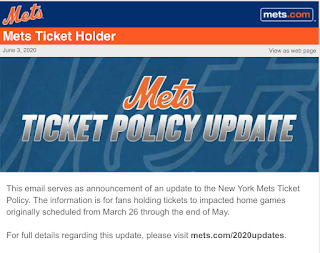 Main stream media catching on about the refund policies of the Mets and the Yankees. The Red Sox seem to be making it a lot easier on their fans to get refunds.

Three days into June, the Yankees and Mets finally acknowledged that their May home games will not be made up in any way, shape or form.
You’re still going to have to break a sweat for that refund, though.
On Wednesday, both New York baseball teams released statements on their team websites announcing the addition of May games to their “Impacted” list, which previously included games scheduled for March and April. With this move, the Yankees and Mets caught up to the Red Sox, among other major-league teams, who had notated the May games as impacted back on April 29.
Whereas the Red Sox utilized refunds as the default option, however — their ticket-buyers automatically received their money back unless they proactively chose another option such as credit or an exchange — the Subway Series rivals won’t make it that easy on their customers.

I think the Mets and Yankees need to realize that the season is not going to be played in front of fans. Even with the discounts in place if you roll your tickets over, folks are out of work. They should be able to get money back from this season without a problem and without any kind of "penalty" of not being able to have the same seats back or loss of any kind of perks such as playoffs etc.  Don't lose fans by being greedy folks.
Posted by Media Goon at 12:30:00 PM