Flashback: Remember when the Mets couldn't their own history?

In case you newer folks to the Mets blogs... I have no idea how many of the original bloggers that were actually invited by the Mets for bloggers nights are still around. This is one of the starts of Shannon Shark and myself taking the Mets to task for messing up their own history.

This is from the NY Times. 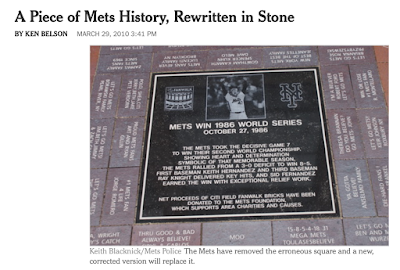 But as the sleuths at the blog MetsPolice.com note, Sid Fernandez was incorrectly credited on the square with being the winning pitcher that night. As Mets fans of a certain vintage know, Fernandez pitched two and a third innings of sterling relief in Game 7, but he did not get the win. (Pop quiz: Who was the winning pitcher? Hint: He was also the “second spitter” on an episode of “Seinfeld.”)
The Mets have removed the erroneous square and a new, corrected version will replace it. But that hasn’t stopped Mets fans from venting. As one writer on MetsBlog.com put it: “Oh come on. Picky, picky. It’s not like Game 7 of the ’86 Series was an important moment in Mets history or anything.”

Since there isn't a lot of Mets news out there right now, why not revisit some of the older stuff...