We are building a mall, affordable housing and parking. Scratch that make it just parking - The Wilpons 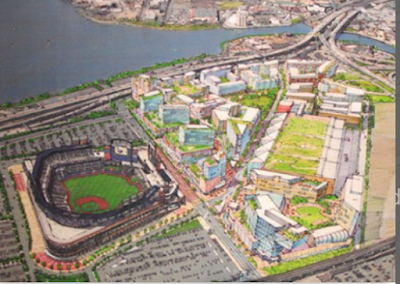 Since the Wilpons haven't been able to get their second mall built on NYC Parkland, it seems the affordable housing went out the window for now. Especially with this Air Train garbage going to Laguardia. Check out what @Metspolice thinks about this....

Oh that’s nice, a coaltion supports the AirTrain.  Let’s learn more…
Source: Coalition Formed to Support LaGuardia’s AirTrain Project — Queens Daily Eagle
That’s nice.  It’s also nonsense.  If you think someone is going to not hop in Uber when they can take the 7 train all the way from Manhattan to Willets Point, transfer and then take a train back to the airport, you are crazy.

Read more from Shannon over here.
You folks want to know why the Wilpons won't sell the team? They love the real estate game. It is amazing that no one realizes what is going on over there..

Just remember this was the original version of Willets Point Redevelopment.

Willets Point is an area in Corona, Queens, bounded by Northern Boulevard, 126th Street and the Mets ballpark, Citi Field. The site, collection of auto-repair shops and scrap yards, is the focus of redevelopment efforts. In 2007, Mayor Michael Bloombergsaid the city planned to redevelop Willets Point as the site of a convention center, 5,500 housing units, 1.7 million square feet of retail, an elementary school, and 500,000 square feet of office space.  - The Real Deal

Then came, let's build another mall where Shea Stadium once stood. 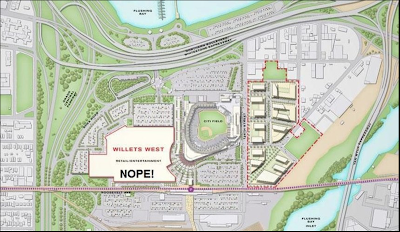 The state’s Court of Appeals had nixed a version of the Willets Point plan that put a small shopping mall on parkland. The development team working on the project, which is comprised of The Related Cos. and Sterling Equities, the real estate arm of the Wilpon family, proposed a 1,100-unit affordable-housing complex on six acres, with the remaining 17 acres of public land still in discussion. “It’s time to jump-start Willets Point, and we are doing that by building more than a thousand homes for seniors and families struggling to make ends meet,” Mayor Bill De Blasio said when the plans were announced.
But according to according to documents discovered by Queens filmmaker Robert LoScalzo, the developers told the state agency overseeing soil remediation on the site that they were planning to build parking lots instead. It was suggested that the parking lots would be used by Delta Air Lines, which is involved in a massive renovation of its terminal at La Guardia and has been scrambling to find space for contractors to park (there is currently an agreement with the Mets to use Citi Field parking). LoScalzo, who is working on a documentary about Willets Point, said the parking lot plan means “the city has drifted over to other priorities” different from those which justified hundreds of business being booted from the area.- 6sqft.com