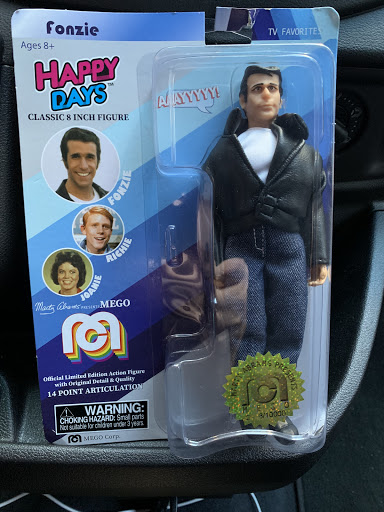 When I was growing up, one of my favorite shows of all time was Happy Days. Of course, just like everyone else my favorite character was Arthur Fonzarelli. You might know him better as “The Fonz” or “Fonzie”. He was the cool guy that has the blue windbreaker on in the early days of the show back when they did exteriors and shot it on film. Then Fonz was eventually allowed to wear his iconic leather jacket (which is now in the Smithsonian) and one of the most iconic characters of all time was solidified. Fonzie was a street tough with a heart of gold. He protected his freinds from other toughies and was a ladies man.

I got to meet the man who played Fonzie when I worked on Royal Pains. Yes. Henry Winkler is the nicest man in Hollywood. It’s not an act either. He is one of the kindest people I have ever met and we had some great conversations over the years. When they say never meet your heroes, they didn’t mean never meet Henry aka “The Fonz”. The man lives up to his rep. I even have a leather jacket signed by him now.

I also miss Edgardo Alfonzo aka “Fonzie”. He was a Mets player that did what needed to be done for the team. Played wherever the Mets needed him to and never complained about it. He was a tough out and a solid defensive player. When he came to the plate you knew he was going to either get a hit or make the pitcher work to get him out. It would have been great to see him do a Fonzie from Happy Days parody in the 90s/2000s with him wearing a leather jacket at a drive in restaurant banging a jukebox to get it going.

I also got to meet Edgardo a few years ago during a Nestle Quick Wiffle Ball tournament at Citi Field. We took his son who was twelve years old at the time on our team. Fonzie was such a nice guy, joking around with everyone and you could tell he was having a great time. I’m glad he’s the manager in Brooklyn for The Cyclones. He is going to do right by the kids on that team. Solid baseball guy and just seems to be a solid guy period.
That’s the tale of the two Fonzies that I have gotten to interact with in my life. I wonder when the next time is going to be when I get to see them.
Posted by Media Goon at 8:19:00 AM